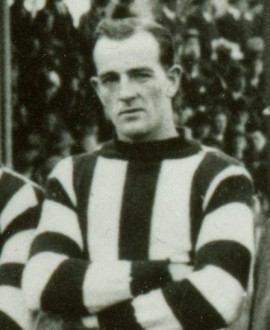 George Tory was lucky to play for Collingwood. He knew that more than anyone else, mainly due to circumstance more than talent.

Tory’s two games for the Magpies came in the opening two rounds of the 1922 season. He was named at full-forward in Round 1 against reigning premiers Richmond on a day when Collingwood had no less than seven first-gamers, including a likely fellow called Syd Coventry.

Tory kicked a goal that day when the Magpies lost to the Tigers by 17 points, being opposed to champion Richmond defender Vic Thorp.

A week later against South Melbourne, he had the distinction of playing at centre-half-forward with Syd and Gordon Coventry on the accompanying flanks.

He didn’t trouble the goal-scorers that day, as the recruit from the Collingwood district faded into football obscurity.

But few could have known just how close this 22-year-old from the Collingwood District team – he had actually been born in Omeo – came to not even being around, let alone playing VFL football in 1922.

Four years earlier, Tory almost never made it back to Australia after departing on one of the last ships to sail off to war in mid-August 1918.

Ironically it wasn’t war that almost took Tory; it was the deadly influenza epidemic that was sweeping the world at the tail end of the First World War.

Tory enlisted as part of the Railway Unit a few months before his 18th birthday, hoping to make it to the theatres of war before the culmination. The young fitter and turner from the Victorian Railways wouldn’t make it in time.

However, the journey across the seas would be a deadly one, and another Collingwood connection proved that.

One of those accompanying Tory and the reinforcements on the Barambah was Sam Campbell, who had played one game for Collingwood in 1910.

Campbell would be one of the casualties when the ship was hit by an influenza outbreak not long after stopping off in South Africa. He would not be as lucky as Tory, and would die of his illness in Freetown, Sierra Leone on October 21, 1918, just 21 days before the end of the war. He hadn’t even fired a shot in anger.

Neither had Tory, who would be one of the lucky ones to escape the influenza outbreak, but only just. He presented to the ship’s doctor on October 11 and spent two days in the infirmary before recovering just as quickly as Campbell had succumbed.

The ship’s journey was plagued by a series of deaths and there was an outcry back home – and a parliamentary debate – when it was revealed just how many soldiers had died aboard it.

There was simply relief when Barambah finally docked in England on November 14,1918 – three days after the Armistice had been signed.

The war was over for Tory before it had even started. But instead of perishing on the ship as Campbell did, he got his chance to play VFL football after the war, and lived until March 29, 1952, when he died, just short of his 53rd birthday.