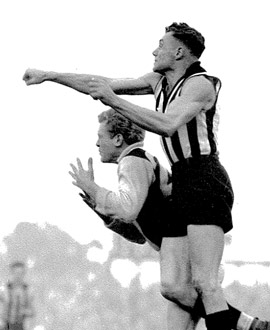 In days gone by – and not that long ago – representing your State was one of the greatest honours that could be bestowed upon a player. For those born in Victoria, pulling on the Big V was almost invariably a career highlight. So when Gordon Hocking captained a Victorian side that played Western Australia in Perth in 1951, it should have been a moment he would treasure forever.

Instead it virtually ended his career.

In the very first quarter of that game in Perth, Hocking fell awkwardly and was carried from the ground in agony. Perth doctors took one look at his knee, placed his leg in plaster and told him on the spot that he would never play football again.

Hocking was understandably shattered. So were his State and Collingwood teammates. In fact, before their next match, his Victorian comrades lined up in a V-shape on the ground as a salute to their stricken leader, who was watching from the grandstand. Hocking later described that moment as his most memorable football experience.

Even though it ended badly, his appointment as Victorian skipper had come as no surprise, for Gordon Hocking was one of the most respected players in the game – and one of its greatest leaders. After his death in 1986, his former teammates queued up to pay tribute not only to his football ability, but also to his leadership skills.

Bob Rose said he would always remember Gordon “for the inspiration he gave me when I played under him when he was captain.” Thorold Merrett said Hocking was “what I grew up to think that all Collingwood captains would be like.” “He was only 5′ 10″ but when he pulled on the Collingwood jumper he was 10 feet tall,” Merrett said. Bill Twomey said he was a “fearless leader” who would do anything to help his team. And Lou Richards said he “had a heart bigger than Victoria Park, tremendous courage and a mighty leap.”

This was a man seriously revered by those who played with him. And it’s no wonder, because Hocking gave everything he had to the Collingwood cause from the moment he came into the team, often taking on the toughest jobs going – regularly lining up against guys who were much bigger and stronger than he was, especially in the ruck. This led to him being dubbed the game’s “smallest big man”.

It was in these roles that Hocking’s persistence, spirit and fearlessness shone through. “What he lacked in inches he made up for by being a fearless player — he tore in for the ball irrespective of who was in his way,” wrote Lou Richards. In 1952, the magazine Sporting Life declared him a “football freak” for being able to outpoint so many physically superior opponents. “His only qualifications for being a ruckman were great football ability and a heart as big as a football,” it said.

Beyond heart and courage, Hocking also had plenty of other skills. He was a magnificent mark with a great leap, an even better spoil, and could kick it a long way. He was also a good reader of the game, and incredibly versatile – throughout the course of his career he played in every position except rover.

His favourite role, and the one he most frequently filled, was in defence with spells on the ball. He liked having the game in front of him and being able to charge straight at the ball from the back pocket. Even there he still regularly found himself pitted against taller opponents, but his remarkable spring often gave him the edge anyway.

Hocking had come to Collingwood in 1938 from Chelsea in the Federal League, where he played in two flags before spurning offers from Fitzroy and St Kilda. He made his ‘technical’ debut against the Saints in Round 8 but didn’t make it onto the ground until two weeks later against Geelong, where he kicked a couple of goals.

War service forced him to miss the entire 1942 season, and also restricted him to only seven games in the following three years. But he returned to Victoria Park in 1946 (bearing a new nickname, ‘Jungle’) and almost immediately looked to be back to his old form.

He was named vice-captain in 1948, and took over the top job in 1950 when Phonse Kyne took over the coaching reins from Jock McHale. By the end of the year Hocking had won a competition run by 3AW to find the League’s most popular captain. He’d also won even more fans amongst his own teammates: they respected him for his inspirational leadership, but they also liked him as an honest, genuine sort of bloke who loved the footy club and socialising with his teammates.

He played interstate football in 1948, 1949 and at the ANFC Carnival in 1950, all of which led to his appointment as Victorian captain – and the tragic leg injury – in 1951. But even as he lay in his hospital bed digesting the diagnosis that he would never play again, Hocking began planning a comeback. For a start he wanted to become only the eleventh Magpie to make 15 years service. And secondly he just wanted to prove those doctors wrong. The never-say-die attitude he’d carried through so many Collingwood matches was as alive as ever.

Remarkably, he didmake it back. He returned to Melbourne with his leg still in plaster (John Wren, a big fan, welcomed him back with a cheque for £200) and immediately started working on a return. The comeback came in Round 6 of the following season, against Footscray at Victoria Park, where the home crowd gave him an emotional ovation. He managed to play three further games but the knee really wasn’t right, and he retired before the end of the year, announcing his decision to 3000 Magpie fans gathered at the Melbourne Town Hall for the club’s annual Kia Ora Sports Parade variety event. Newspapers reported that those fans initially fell stunned and silent – then erupted into thunderous applause.

Hocking turned 32 the year he did his knee, and there’s no guarantee how much longer his career would have lasted even without the injury: his body had taken a hell of a clattering in the Magpie cause over the years. Could a fit Gordon Hocking have made a difference in 1952, when the Pies finished second? Could he even have lasted until 1953, when he may well have led his team to a Premiership? We’ll never know, of course – but no Collingwood captain would have deserved it more.