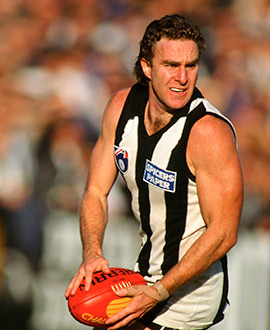 An ex-East Devonport (Tasmania) player whose non-stop running on the wing made him a menace to opposing teams.

He took a while to settle down in his first year, but by 1990 he went within a vote of winning the Brownlow.

In the same season he was part of a Tasmanian State-of- Origin team that beat Victoria then capped it off by playing in the Magpies’ premiership team.

Ankle problems hampered him the following season and at the end of 1991 he shocked the club by announcing he was turning his back on the game and heading home to Tasmania. Collingwood coach Leigh Matthews talked the gifted Wright into coming back.

After the 1993 season Wright contracted a debilitating disease that looked like ending his career, but he recovered over summer.

His career continued to be dogged by injury when he badly injured a knee in mid 1996 and had to undergo a knee reconstruction.

As he lost the edge of his speed in later years he became a handy player in defence where his trademark courage shone through.

He played one game of state football for Victoria and also for his native Tasmania, and later became one of the most highly respected recruiters in the game while working for Hawthorn.