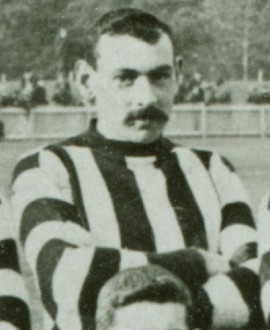 Few, if any, Collingwood footballers have a military service record to match that of Harold Gyton.

The lanky Gyton, who played nine games for the Pies in 1908, served in both World Wars – enlisting for the Second World War at the ripe old age of 56!

The Richmond-born Gyton was trained as a blacksmith and moved to Queenscliff/Swan Island when he enlisted in the army in his early 20s (though some reports also suggest he’d first enlisted in 1902, when he was 18). He re-enlisted every three years from 1906 onwards, and served until 1944. He was awarded an MBE in 1936 after 30 years continuous service, and a Meritorious Service Medal in 1931.

He was given glowing reports of his service throughout his time, and by the end of his military life was a Lieutenant Colonel. “[He is an] officer of the highest integrity with great strength of character, sound judgement…even tempered and has the power to command respect…looked up to and respected by all ranks,” said one note on his file.

Gyton enlisted in the Royal Australian Engineers in the Permanent Army in 1906. He was an instructor with the Australian Instruction Corp at Duntroon during the First World War, trained in England in 1912-13 and was still with the Instructional Corp 30 years later. At the age of 56 he sailed on the Queen Mary to the Middle East and served there for two years before returning to Australia where, after nearly 40 years in the army, he was discharged with heart problems.

While at Queenscliff, Gyton also came under notice for his footballing prowess. He played with the Engineers of Queenscliff in a three or four team competition around 1906/07, a competition in which future teammate Jack Shorten also featured. Gyton also played cricket for the Royal Australian Engineers in the Bellarine District Cricket Association.

Gyton was exceptionally tall for his time, standing around 5’10½ inches, so was always destined to end up as a ruckman. It is not known how he came to Collingwood’s attention, but he made his debut in the Round 3 game against University in 1908 (a game in which Dick Lee kicked seven out of Collingwood’s eight goals). The Age said later said Gyton had “shaped well” on debut, while the Weekly Times said he “rendered fine service” and Punch said he “suffered well the slings and arrows of outraged fortune.”

He played his first five games in a row, despite having to train at Swan Hill and coming to Melbourne only on weekends to play. He was variously described in those matches as “useful”, “noticeable” and as “having come to the rescue”.

But he was injured in one match, then suffered an ankle problem while training at Swan Hill. He also missed at least one game while “having a spell” in the Western District. The result was an interrupted second half of the season that saw him play only four of the last 12 games of the season.

The bottom line is that Harold Gyton did well enough in those first nine games to have seemed likely to be able to extend his time in the big league. Instead it looks as if his military commitments brought a premature end to a promising career. He disappeared from Collingwood at the end of his one-and-only season in the VFL, and it’s not clear where he ended up – at least in a footballing sense. In terms of the service he would give his country, however, his journey was only just starting.