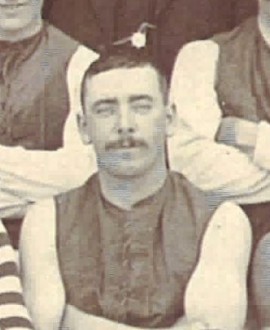 Harry Knell enjoyed an outstanding career at Collingwood – but unfortunately almost all of it was in cricket. His time on the football stage was fleeting, and shrouded in not a little mystery.

Harry, who was born in Queenstown (near St Andrews), was part of a family with widespread sporting talents. One of his cousins, Jack, played 32 games with Geelong as a rover from 1904-06 while another, Richard, was centre half-forward for Richmond in the VFA around the same time.

But Harry’s talents lay mostly on the cricket field. He was a tall, strapping young man who bowled dangerous left-arm medium pace “with a turn from the leg”. He played pennant cricket for St Kilda around the turn of the century, and after some years in lower level cricket crossed to Collingwood in 1908 where he played alongside the legendary Collingwood figure and Australian Test player Jack Ryder. He regularly took big bags of wickets and was an important member of the team.

In 1920, while playing for the Victoria Brewery in the second grade of the Victorian Junior Association at age 39, he took all ten wickets in the Northcote Footballers’ innings for six runs, including four wickets with four successive balls. This prompted the great Jack Worrall to reminisce about Knell, who had at one time been a ground bowler at the MCG. “Knell, a fine physical specimen, would have made a name for himself in big cricket if he had persevered, as he had wonderful natural ability,” Worrall wrote.

With his height and strong build – he was around 182cm tall – he might also have been well suited to a role in football. Maybe that’s what the Magpies were thinking when they gave him a game, almost out of nowhere, in 1901. It was against South Melbourne in Round 10 at Victoria Park. His selection prompted little commentary beforehand, and there seem to have been conflicting reports on how he fared. The Age said that “Collingwood played Knell, a Geelong Junior, who shaped well”, whereas the Australasian noted that one of the South players had “settled the pretensions of Knell”.

Whatever the view from outside, Harry Knell was omitted for the next game and never reappeared. Indeed, that seems to have been the last anyone can trace of Harry Knell as a footballer, and we know little about his game. There’s every chance he focused almost exclusively on cricket, and indeed when he enlisted for the First World War in 1915 he gave his occupation as “professional cricketer”.

This happened at the Queenscliff Artillery Barracks and he was a 34-year-old married man by this time. He enlisted as a Gunner in the Heavy Siege Artillery Brigade, and left Australia on the Orsova in July 1915. He went AWOL a couple of times during his stint overseas before being sent home early in 1918 due to chronic rheumatism. He returned to playing cricket with the Victoria Brewery side, even though many felt he was still capable of playing at a higher level.

As it did for so many soldiers and their families, Harry’s homecoming prompted hearty celebrations. The residents of Hurstbridge and surrounding districts met at the Hurstbridge Hall to welcome home both Harry (whose sister, Mrs Luckman, was a local identity) and ‘Digger’ Reed, another local boy. Harry himself became part of the evening’s entertainment when, accompanied by his sister on the piano, he performed a song called “Must you always have the missus with you?” so well that he received an encore. Later, when he also paid a visit to Queenscliff, that too was local news.

Harry Knell died in Prahran in 1936, aged just 55. He was rightly remembered more for his cricketing achievements than for his solitary game of VFL football, but he remains one of a fairly select band to have represented Collingwood at both sports.