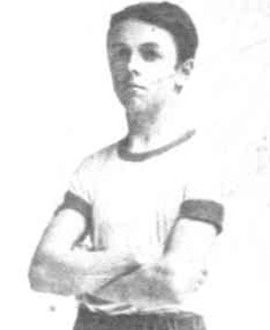 The term ‘champion schoolboy athlete’ is often thrown about a little loosely when describing kids who later became good footballers. But in Reg Lloyd’s case, it seems to have been be true.

So prolific were his achievements as a junior that the weekly newspaper Punch was moved to write a small feature on him in 1914, when he was just 14 (the photo on this page is the only one we have of him, and accompanied the article).

The paper noted he had just succeeded in winning the Championship at the recent sports meeting of the Victorian State Schools’ Amateur Athletic Association. He won both the 220-yard and 120-yard races for boys aged between 14 and 15, but then also won the overall Championship double, winning both the same races as open competition to all boys. He also finished second in the long jump, was captain of the team which won the relay race, and a was also member of the successful team in the Tug-of-War. Not surprisingly, his school, Albert Park State School, was rated the Champion School of the Year.

Reg would continue to ply his athletic trade in the years ahead. He won the all-schools championship in 1917 (and may well have done so in other years too, but records are incomplete), and was a regular at Stawell in the late 1910s and early 1920s, even making it to a couple of finals.

This was a youngster who was seriously quick. So it was no surprise that he proved to be a more than handy footballer on the wing.

He played with Canterbury in that role in the 1920 season, in the same team as Les Lobb and Jim Keogh, and on the opposite wing to Ernie Dingwall, who would later play with Carlton.

He was invited to take part in Collingwood’s practice matches before the 1921 season and did well there on the wing. He was added to the senior training list before the season (along with former teammate Keogh) and was noted as being “the reserve wingman”. “He has plenty of pace and is very skilful,” noted The Herald.

Reg played games throughout the year with the Magpie reserves (Collingwood Districts), where he was regularly named amongst the best players and also managed to kick some goals. He hit a purple patch of form in the middle of the year, and the selectors became so keen to see him in action that they broke up the famous centreline of Bill Twomey Snr, Charlie Pannam and Tom Drummond in order to squeeze him in for the Round 10 game against Melbourne. Twomey played on the half-back flank that day, allowing Lloyd to take his now customary place on the wing.

This was a bold move. Twomey was among the team’s best, and Lloyd did well too, though the team lost. “In order to give Lloyd, a recruit, an opportunity of showing his paces he was placed on the wing and Twomey was played half-back,” noted The Herald. “Of Lloyd it might be said that he was as good as either of the others of the Collingwood centre line.”

Strangely, though, that was where Reg Lloyd’s League career both started and ended. He was dropped the next week and never returned. He headed to Brunswick briefly at the start of 1922 but was soon back at Canterbury. He crossed from there to Balwyn in 1923, where he became captain-coach and a key player.

One of the unusual aspects of Reg Lloyd’s career is that, for most of the time, he has appeared in football history books as ‘Harry Lloyd’. That was indeed his first name, but recent research has shown that he was most often referred to by his middle name, ‘Reg’ – possibly to distinguish him from his father, who was also named Harry. Whatever the reason, Reg it now is – and by any name, he was a supreme athlete who won only the briefest of opportunities at the top level.