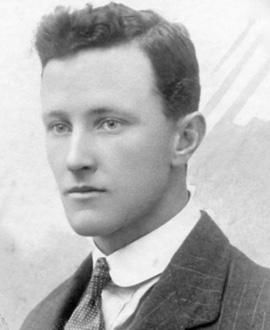 They called it neurasthenia, and it would become one of the great curses of the First World War.

It was a form of ‘shell shock’ brought on by the incessant bombing and shelling on the Western Front that took men out of the lines for days, weeks, months and sometimes for good.

One of Collingwood’s original Anzacs, ‘Harry’ Matheson served with distinction throughout the Gallipoli campaign and for a time in France, rising through the ranks to become a Lieutenant. But in late October 1916 – just over two years after enlisting – Matheson was brought into a Casualty Cleaning Station in a bad way. He would be evacuated to England, given time to recuperate before being sent home to Australia where he was discharged as medically unfit.

Matheson was 25 at the time and the diagnosis of neurasthenia was hardly surprising or unique given the massive bombardments the diggers had to endure during that horrible 1916. Ironically, he would serve in an administrative role for the Australian Ordinance Corps during the Second World War, where part of his role was to work on the supply of shells that had caused him so much angst a generation earlier.

William Henry Matheson was born at Nagambie on June 12, 1891. ‘Harry’, as he was known, took to playing football at an early age and played for Clifton Hill Juniors, bringing him to the attention of VFL clubs. He made his debut for St Kilda as an 18-year-old near the tail end of the 1909 season, kicking a goal in his first game. He played in the last three games of the home-and-away season as well as a further four the following year, though the same thing happened each time – the Saints lost.

Matheson then tried his luck with Carlton and still couldn’t manage a win in his first game in navy blue, the Round 1 clash with Essendon in 1911, which ended in a classic draw. That was a game notable for the first time former Blues coach Jack Worrall had coached the Same Old, and it made for a thrilling finish.

He managed only six games in the next two years, and ended up at Swan Island for 1913.

Collingwood gave this forward/wingman a chance for his third shot at VFL football in 1914 and he made a good fist of it, even as the dark clouds of war loomed over the world. He performed well in the Magpies’ final practice match, impressing coach Jock McHale as a “fast and clever wingman”.

By Round 3 Matheson had played himself into the senior side, making his first appearance in black and white against Richmond at Victoria Park. The Argus gave him the thumbs-up for a fine performance, recording: “Matheson is clever about goal … his short passing is accurate and he should be of much assistance to the side.” And the Football Record said: “Matheson came from Swan Island to take his place on the field with Collingwood … he played a good game half-forward, marking and kicking well, and picking out his man every time.”

But playing well in a debut game did not always mean playing the next week, and Matheson had to wait until Round 8 to play again, finishing the season with nine games to his credit as well as eight goals. Yet, just when a career was unfolding, events in Europe changed his and the nation’s focus, and he signed up for the Australian Expeditionary Force, with greater battles in mind than football.

The Queenscliff Sentinel said in August 1914: “Mr H. Matheson, who was going away on a trip with the Collingwood Football Club to Brisbane, was recalled back to duty on account of the war.” Soon after, the Football Record documented a ceremony in the tea-room at the MCG at quarter-time in a game when “several members of the Collingwood club met to say farewell to say H.Matheson and A. Cordner, two of the team, who are off to the Great War with the Australian Imperial Force. Mr J. Sharp (president) was in the chair, and presented each man with a wristlet watch.”

Matheson, a cabinetmaker by trade, had enlisted as a sapper with the 2nd Field Company and sailed from Australia in late 1914. In Egypt, where they were initially based, he used his football experiences to help push to keep the men fit, playing a role in a match there that won him some recognition back in Australia. The Football Record credited him with “the honour of being the first Australian player to captain a side which won a game played under our code in Egypt.”

But there were more important things afoot for the AIF, as they took part in the Gallipoli campaign that ran from the April 25 landings through until the evacuation in late December 1915. Matheson joined the 4th Pioneer Battalion following Gallipoli and sailed for France in June 1916, where he would become a lieutenant a day after arriving at Marseilles.

His time in France would be short and difficult, though his letters home only gave a hint of what the Anzacs were enduring. By October 1916, he had written home to Collingwood’s Syd Sherrin, thanking him for a number of “sporting papers” which he had sent across. Matheson wrote: “Anyway, Syd, old boy, it shows that one is not forgotten, even after two years of absence. Sam Mortimer (another Collingwood player) and myself have been together in the same for the past two months. We have been through some pretty stiff stunts, but thank God, we’re still sailing.”

“Have seen ‘Doc’ Seddon (former Magpie teammate) about six times since coming to France, but not within the last four weeks. Have not seen Pat Rowan since Egypt and Jimmy Jackson only once in Flanders. Did you know that Sam Mortimer is now a father? He had a son born on August 19, 1916. Keep your eye on the lad; he is bound to turn out a footballer. Who knows, perhaps when this war is over, or when we are invalided out through old age, his dad and myself will be able to see the lad sporting the good old colours.

“Syd, the third quarter bell has just rung, and we are leading the Huns by 12 goals. It seems a certain victory. Nothing but a miracle can save them.”

Soon after, following yet another heavy bombardment, Matheson was brought in with neurasthenia and invalided home after a stint in England. Collingwood welcomed him home, and for a time he even trained with the club, though he would never again wear the jumper in a senior game.

Gerald Brosnan wrote of his homecoming in Winner in March 1917: “Few amongst the prominent sportsmen who have enlisted have enjoyed the varied experiences and exciting times and battles our friend Harry has witnessed and taken part in. He has fought tight through the Gallipoli, Egyptian and French campaigns, without, so far as I am aware, receiving anything more severe in the nature of wounds than a scratch. His recital of the stirring times through which he has passed should be worth hearing. That he has richly earned a rest will be freely admitted.”

On his return, he presented the club with a British shell case from Pozieres, which was especially poignant given the shelling from that region had played a significant role in his neurasthenia.