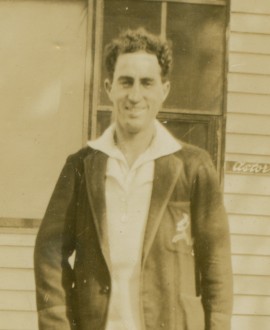 Footballers endured all manner of adversity through the hungry years of the Depression. Hector Ross was no exception on a couple of fronts.

With the scarcity of jobs and the tightness of income crucial factors in the lives of so many people, footballers frequently travelled the countryside, from club to club, simply to make ends meet. Ross (no relation to Bob Ross) was one such player. He played for seven different football teams in a 15-season period, including stints with Collingwood, Carlton, Northcote, Stawell, Ballarat, Alphington and Fairfield.

But Hec Ross’s adversity was a much more personal one, for he had a slight deformity of the right shoulder socket that led to him being known to his teammates and friends as ‘Wingy’. However, this problem remarkably had no impact on his performances or the way he played the game. As the Sporting Globe remarked: “for a man of his build [165cm and 69kg], he is very solid in the heavy work, and though his right arm is not so useful to him as it might be … he is a very capable man in marking or handling the ball … he is still showing high class”.

Ross began his football with Fairfield State School and Alphington Juniors. From there, he spent two seasons with the Collingwood District side, waiting for a senior chance that did not come. As a result, he joined Northcote as a rover, playing from 1922 to 1924. Stints with Ballarat and Stawell (where he played with Bill Twomey Sr) followed, where he was regarded as a “champion” in 1926 whether roving or in defence. He had intended to play with South Ballarat in 1927, but when that club was disqualified from competition he decided to come to Melbourne and try his luck.

He initially returned to Northcote, then transferred to Collingwood mid-season. He played his two senior games shortly thereafter, the Geelong Advertiser describing him as “small, fast and clever”. The selectors tried him on a wing and at half-forward, but the Weekly Times praised his “cool and clever work” in defence in the dying stages of his second game, against Melbourne, describing him as a “valuable acquisition” to the Magpie line-up.

But his last quarter heroics weren’t enough to save him at the selection table, and his senior career extended no further. Nevertheless he did make a major contribution to the club later the same season. As an amateur photographer, he took his camera on the club’s mid-season excursion to Perth in the 1927 season, capturing some rare and brilliant snaps of Magpie champions at leisure.

In keeping with his much-travelled status, Ross moved to Carlton in 1928, where he played nine games and kicked 10 goals, and then settled back at Northcote the following season. There, he teamed up with a number of former Magpies, including Percy Rowe, Ernie Wilson and (later) Bob Ross, to play in successful sides.

Hec Ross, who worked as a gardener and also in retail at Treadways, lost his wife at an early age, yet managed to do a great job of bringing up his daughter, Merle. He returned to Victoria Park later in life to work with the under-19s team, and to play an important role with the club’s Past Players Association. ‘Wingy’ Ross may have played for numerous football clubs, but he remained a passionate Magpie all his life.