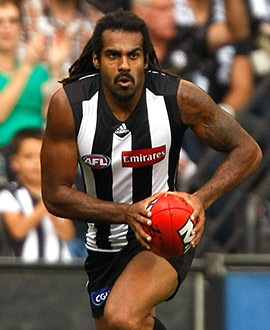 Born in Brazil, he was the son of a Congolese father.

The ex-Claremont (WA) half-back was elevated from rookie status late in 2005 for four games, playing the first part of his AFL career under the name Harry O’Brien. He looked good early in 2005, but then was discarded for several weeks.

He liked to run hard from defence and take risks and developed into a versatile player who could be trusted to handle forwards of differing sizes and types. After the retirement of James Clement at the end of 2007 he was thrown even more responsibilites and after a flat spot early in the year he regained form and was a consistent force to finish fifth in the best and fairest, then fourth in 2009.

In 2010 he showed that he was not the everyday AFL footballer, telling of how he wanted to meet President Obama, and on Brownlow night gave a verbal spray on materialism and female body-image. He had great confidence in his own game and was able to combat opponents of various builds and weights. In the 2010 Grand Final he had some worrying moments on Stephen Milne and made some uncharacteristic fumbles, but in the Replay he completely nullified the Saint forward. He was All-Australian in 2010.

O’Brien continued to work in defence for the next year but in 2013 was used as a wingman to good effect, and despite mid-season challenges he had a strong year, finishing fifth in the best and fairest.

O’Brien formally changed his surname over the off-season to Lumumba, resuming his original first name of Heritier. He performed well for much of 2014, but sought a trade at year’s end, moving to the Paul Roos-led Melbourne after 199 senior games.