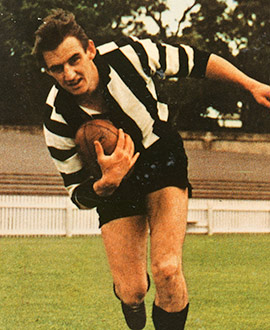 Ian Graham was not your average footballer – in any way. Exceptionally gifted and athletic, he would spark early comparisons with some of the game’s greatest, winning the Copeland and twice topping the club’s goalkicking in his first four seasons. But then, against all expectations, he walked away from the game at the height of his career to go travelling for a year. The end result was one of the most fascinating Magpie stories of the 1960s.

Ian had the kind of skillset that would have set a coach’s heart racing at any football club, in any era.

He stood around 185cm but was quick and athletically gifted. Lean and lithe with good ground skills, he was a long kick with an elegant style. And he could mark – boy, could he mark. He was great on the lead but also good at flying in packs. His combination of speed, athleticism and marking ability prompted comparisons with Ron Todd and John Coleman. He quickly became one of the most dangerous forwards in the game.

That’s what he had been hoping for when he was a boy – albeit in a different guernsey. Ian was born in Tongala and grew up an Essendon fan, sporting Coleman’s famous #10 on his back. His father Ken had been a country footballer of some note, good enough to play in inter-league representative sides. Ian found his way to Collingwood via Scotch College and Melbourne University, where he studied civil engineering. While there he played with the University Blacks, winning a place at centre half-forward in the Victorian Amateur team in 1962 and earning for himself an All-Australian Blazer. He also won the Blacks’ best and fairest and finished third in the competition B&F.

Although an outstanding player, Ian had no burning ambition to play League Football and, as a country boy boarding in the city, no clear pathway to get there. So when Magpie recruiter Jack Pimm knocked on his door one day and asked if he’d like to come down to Victoria Park, he just thought ‘why not?’ It was that simple.

Well, perhaps not quite. Ian’s father had not been keen on him following a League career, fearful that it might interfere with his son’s studies. So Ian signed with the Magpies only after club secretary Gordon Carlyon agreed to the proviso that the club would tear up the agreement if Ian’s Dad didn’t approve. Fortunately Ian was able to talk his father into it.

Ian’s first season, 1963, wasn’t hugely successful, though he did manage his first few senior games and his first senior goal, playing at half-forward. He also topped the reserves goalkicking for both club and VFL with 36 goals from just 11 games. But there was little hint of what was to come.

In 1964, after a summer in the gym to build up his wiry frame, Graham took the competition by storm. His first games had been played mostly on a half-forward flank but the turning point in his career came when Terry Waters – the player who would go on to become Graham’s closest friend at the club – began to struggle at full-forward after a barnstorming start to his career there in 1963. Waters moved into the ruck, where he would go on to become a Magpie great, while Graham moved to the goalsquare. Almost immediately, he began kicking goals: five against Hawthorn, four against Fitzroy, then bags of five against Essendon (where he was described as “invincible” against a side coached by his childhood hero Coleman) and six against North to round out the home and away season.

He and Waters eventually tied for the club’s leading goalkicking title with 42 each, and he also won the coveted Copeland Trophy. “His brilliant marking has been the talk of the football world,” wrote The Sun newspaper, “and a big boost to the Collingwood attack. Fast enough for a flank … and his pace worries opponents almost as much as his high marking.”

This was when no lesser judge than the great Gordon Coventry likened Graham’s marking to that of the human highlights reel that was Ron Todd, and said he was the Magpies’ best full-forward since Toddy had ruled the goalsquare.

Ian’s 1965 season was blighted by a serious heel injury that forced him to miss ten games, but when he returned he reminded Magpie fans what they’d been missing with a magnificent six-goal performance on Bob Murray against St Kilda in the second semi-final, including four in the opening term. “Graham’s play in the first quarter was without doubt the best quarter of full-forward play since the days of John Coleman,” wrote Percy Beames in The Age afterwards. “Six times he won the ball with the ease and certainty of a champion and with deadly accuracy and magnificent kicking turned the chances into four goals.”

By now Collingwood realized they had a seriously talented goalkicker in their midst. There had been 42 goals in 1964 and 22 in just 10 games in 1965. That impression was further confirmed when he topped the club’s goalkicking list with 58 goals in the momentous 1966 season, despite still alternating between the two key forward posts. He was also made deputy vice-captain in this year – further underlining just how respected he had already become at Victoria Park.

All of which made his decision to pack his bags and go travelling in 1967 even more staggering.

Ian was already something of an unconventional figure in football. He was a serious tertiary student at a time when most footballers were working, and also a classically trained pianist who had performed on television. Although highly popular with his teammates (coach Bob Rose once described him as “a champion on and off the field, a good mixer and a great clubman … respected by every player, committeeman and supporter at Collingwood”), he just viewed football a little differently to most of his contemporaries.

While at uni, he and two friends had all agreed they would travel overseas together when they finished their degrees. The third of them did so in 1966 and Ian kept his part of the pact, thinking it made more sense to travel before family life fully intervened. So the three friends headed off on a trip that took the best part of a year (they travelled by boat). Even now it seems staggering: he was 24, in peak form, about to hit his best years and seemingly set for a glorious career. Years later he would admit: “I can’t quite believe I did that.”

Neither could the Magpies. Still, after missing all of 1967, the club was overjoyed when he returned for the 1968 season. But joy turned to horror when he suffered a recurrence of his Achilles heel injury at training prior to the practice matches. He underwent two operations and missed all of 1968.

He eventually returned in 1969, playing his first game for two seasons in the reserves. He promptly went out and kicked a lazy 11 goals. He was back in the seniors the following week, and kicked three on his return to senior level. But he struggled again with injuries, including a broken finger, and then suffered a broken neck against Richmond in Round 13. He was married while recuperating and returned to the field late in the season and played in both finals, before deciding to retire for good.

After that he and his wife Margot moved to Canada for two years, then he lived in Sydney for a while before moving to Singapore with work. After four years there, work took him to England, where he spent a decade before returning to Australia around the turn of the millennium. The travel bug that hit him in 1967 never really left, it seems.

That travel bug – and his troublesome Achilles heel – cost Collingwood dearly. Of course the full-forward post ended up being in good hands anyway, because a kid called Peter McKenna came through and did OK in the role. But Graham had already shown he could play either of the key forward posts with equal aplomb: it’s easy to imagine he and McKenna forming a lethal forward line partnership.

Ian Graham was one of more talented and exciting forwards Collingwood has seen. But we never got to see the best of him for long enough. In the end he played only five seasons, for 63 games and 131 goals. It was nowhere near what his talents deserved.