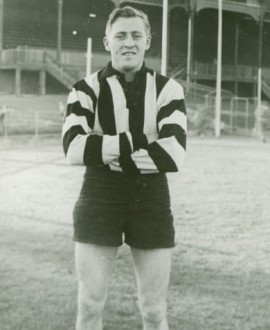 Jack ‘Bones’ Hickey was a Collingwood hero before most Magpie fans even knew his name.

It was 1951, and the VFL had scheduled a Lightning Premiership to be played amongst all 12 clubs to celebrate 50 years of the Federation of Australia. It was played at the MCG on a Wednesday in May (the Jubilee Day holiday), between rounds three and four of the season.

Lightning Premierships were popular in that era, and so it was a reasonably big deal when the Pies defeated Melbourne to claim the title late in the afternoon. It was an even bigger deal for the unknown kid who kicked the winning goal.

Jack Hickey was that kid. He’d joined the club the previous season from Abbotsford, having earlier come through Collingwood tech. He hadn’t played a senior game, and only keen reserves watchers had any idea who he was. To further confuse matters, he played the game in a jumper borrowed from ruckman Bill Tebble, which must have looked huge on Hickey’s tiny frame.

In the days after the Magpies’ lightning flag, there were a few stray paragraphs in newspapers identifying the mystery matchwinner. But precious little more was seen of him until much later in the year, when he finally made a senior debut in Round 11 after a string of consistent reserves performances.

Hickey quickly became a fan favourite. He was one of the lightest players in the competition – hence his nickname – but also one of the gamest. A fast and clever footballer, he played mostly on the wing or at half-forward, with occasional spells roving. The fans loved his ferocious attack on the football, especially given his light frame.

The Sun newspaper described him “frail-looking but extremely stout-hearted”.

“Nobody with his skinny arms and legs could escape the nickname ‘Bones’, the paper said. “Even the Collingwood selectors, who just can’t leave him out of the team, wonder how he stands up to the rigours of League football. A big heart and clever football brain are his winning assets. He thinks quickly and is constantly trying to help his teammates by good passes. Is helped by keen anticipation.”

Hickey played eight senior games after his Lightning Premiership heroics in 1951, capping off the season with a spot on the bench in the preliminary final. He also finished third in the reserves best and fairest. He plateaued a little in 1952, but by 1953 was a regular senior player.

Unfortunately, he missed out on a spot in the ’53 premiership side after breaking his hand in the second semi-final. It was a heartbreaking twist of fate. But he backed up with his best season in 1954, playing through a number of injuries and eventually finishing fifth in the Copeland Trophy count. He then played every game in 1955.

But Hickey’s luck took a decided turn for the worse in 1956. He broke his hand in the opening round of the season and then, in his first game back in the reserves, discovered he had a chipped bone in his ankle. The Argus, describing him as “fearless but fragile”, said he was “fast earning the title of football’s unluckiest player”.

And that’s how things turned out. Hickey played only one more game, late in the season, before retiring and taking up a coaching position at Maffra. He was just 25 when he announced his retirement.

Collingwood fans have always loved a good little man. And in Jack Hickey, they had one of the littlest, but also one of the most fearless. No wonder he was such a favourite. As the first edition of the Collingwood Footballer put it in 1955:

“Jack Hickey is known to all as ‘Bones’
He takes lots of knocks but never moans.
Despite his smallness, and lack of weight,
His brilliant football is truly great.”