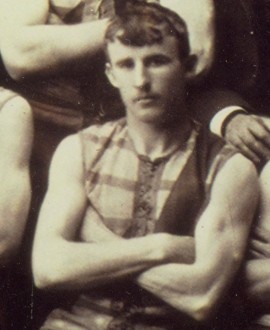 Date of Death
18 December 1952
Recruited From
Britannia
Collingwood Debut
Round 1, 1892

There are two things that cannot be disputed about Jack McInerney. The first is that he was a brilliant small man. The second is that he attracted controversy like few others in the game before him. And it was that second trait that saw his Collingwood career end in disgrace.

McInerney was part of one of the late 1800s most famous footballing families. His brothers – Tim, Thomas and Mick – all played senior football, Tim with Carlton and Fitzroy, Mick with Essendon, Hotham and Carlton, and Thomas with Carlton. This, of course, often created confusions about which brother had played where, given that many newspaper reports of the day failed to distinguish between them.

John McInerney was the youngest of the bunch, being born in 1869, and he added to the confusion when he started playing football in the late 1880s, initially with the Clifton club. The next year he played with Britannia, where he won a silver watch for “all round play”. Early in 1891 he tried out with Carlton and played one senior game, only to play out the rest of the season with Britannia again (where he won a pipe for “back play”).

From there he tried his luck at Collingwood, and was rewarded with a spot in the Magpies’ first ever team – against Carlton – in 1892. He played 13 games that year, kicked a couple of goals, and was generally regarded as having done well. But the next year he crossed back to Carlton (perhaps to play with Tim) and then in 1894 he crossed back to Collingwood again after the Blues told him they “had no further use for him”!

All this yo-yoing between clubs shouldn’t disguise what a good player Jack was. He was an outstanding rover, displaying great bursts of pace and all kinds of trickery, adroit at dodging and a skilful passer. One newspaper described him as “slippery as an eel”. After an early game in his first stint at Collingwood, The Australasian noted: “The best form on the side was, however, shown by young McInerney, who followed splendidly during the greater part of the match and who, though only a moderate handful of humanity, did not fall far short of holding his own with the powerful ruck men of Fitzroy.”

In 1894, his first year back at Victoria Park, Jack and fellow small man Harry Dowdall were ranked as two of the finest small men in the game, according to The Australasian. Jack by then had won a reputation as one of those players who always fought hard for victory, regularly being found at the bottom of packs. In 1895 one newspaper described him as “inexhaustible in resource and indefatigable in his labours”.

Unfortunately, events would soon suggest that wasn’t always the case.

In September of 1895, evidence from one of McInerney’s teammates, George Williams, suggested that McInerney had ‘played dead’ in the game against North Melbourne at the end of August. The committee called a special meeting to consider McInerney’s conduct both during the game and before it, at which it took evidence from Williams, in McInerney’s presence (which must have been uncomfortable to say the least). The wording of the hearing suggested that McInerney had not only played dead himself but had tried to engage others, presumably Williams, to do likewise. After hearing from both men, the committee decided that McInerney would be “disqualified from playing with the Collingwood Football Club for conduct inimical to the interests of the club.” They further ruled that McInerney would not be allowed in either the training or committee rooms at the club. In other words, he was barred. Williams, for his honesty, was subjected to a severe belting by a gang of thugs at a local pub the night after giving evidence.

And so it was that Jack McInerney’s Collingwood career ended in disgrace. He tried to resume his career elsewhere three times in the next three seasons, but each time the Magpies blocked his permit. Eventually, Prahran took him without a clearance in 1899, and he ended up captaining them in 1900-02. He remained a top-notch player. But his name was forever tainted with the stigma of having taking a bribe. And for one as undoubtedly talented as he was, that is a dual tragedy.