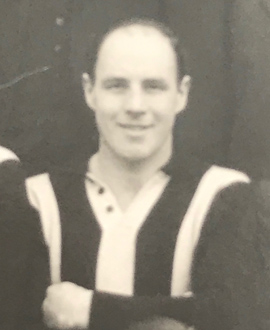 John Nilson’s path to football began in the most tragic of circumstances.

John was of Finnish heritage. His mother Suleima Siuro died in Melbourne from the 1919 influenza epidemic three days after John’s birth. He was adopted by Swedish immigrants Ida and Edvard Nilsson, who lived in West Brunswick.

Neither Ida nor Edvard knew anything about Australian football. But it was thesport in and around West Brunswick, and John couldn’t help but pick up some of the local passion for the game.

He also proved to be unusually adept at it – a tough, uncompromising back pocket or half-back flanker. He ended up getting games with the Brunswick club, and from there was recruited to North Melbourne in 1943. He didn’t play senior footy with North, but had better luck when he transferred to Collingwood in 1944.

He made his debut against South Melbourne in Rd 15 in the back pocket. “The young Colllngwood seconds player Nilson, who has been outstanding in a back pocket all the season, has been deservedly given his chance in a similar position with the seniors,” said The Age. “It is his first big game.”

It was almost his last, too. He was dropped for the next week, but earned a late reprieve and was added to the bench, coming on at quarter-time and doing enough to hold his spot for the last two weeks of the season.

The Pies were well out of finals contention by that stage – they would finish the season in tenth – so there wasn’t great exposure given to Nilson’s first games. But he’d played 14 solid games in the seconds before getting his senior call-up, so it seemed like a good grounding for a more serious tilt at senior football in 1945.

Instead, John Nilson returned to Brunswick. His family say he simply felt more comfortable there. He would go on to enjoy a fine career with the VFA side, eventually rising to the vice-captaincy.

He was quite at home in the rough-and-tumble of the VFA. He also played in the tough Saturday Morning Football League with Wirra Stars (a team which represented the Commonwealth Aircraft Corporation, where John worked during the War years), and once stared down the famous Tommy Lahiff in a confrontation.

He was also, perhaps uniquely in Magpie history, a champion diver. In 1949 he was involved in the finals of the Victorian high diving championships. The reigning champ was a guy named Len Gould, who was due to be married later that day – with John as best man! So the tournament organisers moved the event forward, the boys took their wedding suits to the pool and went straight to the wedding from the event (Len finished second and John third).

John was a medal winner in the Victorian Amateur Diving Association for springboard and high tower diving. The VADA regularly held diving displays on the Swanston Street Princes Bridge and at the Old Olympic Swimming Pool – now home, of course, to the Collingwood Football Club. So there’s a nice ‘full circle’ element to that side of John Nilson’s story – one which began in tragic circumstances but ended with him having excelled in two different sports.