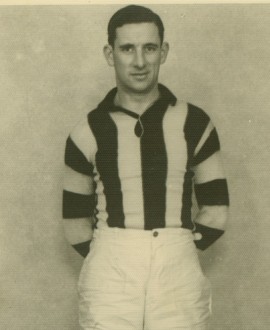 It will always remain a sore point for Magpie fans that, when the AFL decided to announce a Team of the Century as part of its centenary celebrations in 1996, it couldn’t find room for any Collingwood player. And the most staggering non-selection of all was Jack Regan’s failure to secure the full-back post.

This was a man who completely redefined the way full-backs could play. Instead of a stay-at-home ‘goalkeeper’ type, Regan decided to fight fire with fire and take on the high-flying forwards of his day at their own game – competing with them in the air and on the ground, footballer versus footballer. It produced some of the most thrilling one-on-one contests the game has ever seen – most of which Regan won. He was the lynchpin of the Magpie defence in the back-to-back flags of 1935-36, won a Copeland Trophy and placed three other times, and captained both his club and Victoria.

That might not have been enough for the wise heads who chose that AFL centenary team. But it was more than enough to secure his standing among those he played both with and against. Asked in 1946 to name the best full-back he’d ever seen, triple Brownlow Medallist Haydn Bunton responded as if it were a stupid question. “The best full-back? Why, Jack Regan of course. He was streets ahead and the rest were nowhere.” His fellow Brownlow legend Dick Reynolds was asked the same question the next year, and also plumped for Regan, as did Richmond’s Percy Bentley. And Gordon Coventry was in no doubt either.

“The more I saw of Regan the more I thought how fortunate I was to be playing with instead of against him,” Coventry wrote in the Sporting Globein 1938. “Endowed with height and pace, few forwards could hope to take a mark if Regan was flying in from behind, whilst it would be practically an impossibility to spoil him for a mark if he was in front.”

The man generally considered the game’s best full-back before Regan, Richmond’s Vic Thorp, was also a fan: “Regan is a champion in that position,” he wrote. “Everything that goes to make a good full-back is his. His anticipation and judgement are particularly good. He is at his best soaring over the pack from behind. His judgement then is uncanny, and his marking must rival that of anyone. No forward I have seen can beat this fellow in the air.”

There were plenty of outstanding full-backs who came after Regan too, of course – famous names such as Fred Goldsmith, Geoff Southby and David Dench. But they weren’t Jack Regan. And only Dench could claim to have brought something different to the role, whereas Regan broke entirely new ground: here was a full-back whose sense of artistry and adventure made him as exciting to watch as the forwards with whom he did battle.

He was tall (about 185cm) and lightly built, and exceptionally quick for a key position player. But his main assets were his leap, his hands and his kicking. He was a magnificent, high-flying mark – not unlike a defensive version of Ron Todd at the other end of the ground (though much more graceful) – and a beautiful drop kick with either foot. His judgement was seemingly flawless, especially in deciding when to spoil and when to go for a mark.

But perhaps the defining characteristic of his play was courage. Not the normal kind of football courage, usually displayed backing into packs or throwing yourself at the ball, but the courage to back his skills against some of the finest full-forwards the game has known. With opponents as talented as Pratt, Mohr, Vallence, Moloney, Todd, Titus and Margitich, that was no small thing. His battles with South Melbourne’s Bob Pratt, in particular, are the stuff of football legend – two high-flying superstars who went at each other in a battle of pure football skills. There was little or no negativity: no blocking or scragging, double-teaming or crude attempts to spoil that would ‘accidentally’ result in a blow to the head. Instead they’d soar against each for marks, with Regan’s sole nod to his role being a willingness to punch the ball even once he was up in the heavens. These were thrilling duels that came to be a highlight of every Collingwood-South clash of the era.

Regan was born in Northcote and was much more interested in cycling than football as a youngster, being regarded as a promising junior with the Northcote Amateur Cycling Club. A mate encouraged him back into footy and, after one game with Northcote reserves, Collingwood sent out an invitation.

What the Pies had seen in the raw youngster wasn’t immediately apparent. He spent 1929 with the seconds, playing mostly in defence. He got his first taste of senior football early in 1930 – just over a year after his first training run at Northcote – but didn’t make it off the bench. He was awful in his first two games, and in his third had the ignominy of having 10 goals kicked on him, by St Kilda’s Bill Mohr. He actually crossed back to Northcote in the lead-up to the 1931 season, but both club and player thought the better of it and he came back to Victoria Park – this time as a forward. One day he had the chance to win a game with a kick after the siren, but missed. After later apologising to Jock McHale, the coach gave his now famous reply: “Go and throw yourself in the bloody Yarra”.

Regan improved sufficiently as a forward to eventually gain Victorian selection in that role in 1933. But he was moved to defence again during those interstate games and did so well that Collingwood followed suit soon after his return. From that moment on, he was the game’s best key defender. Known as ‘Snozzle’ to his teammates (his nose was rather large), he won the Copeland in 1936 and was runner-up three other times. He was an automatic State selection between 1933 and 1939, was never even admonished by an umpire and regularly polled well in the Brownlow voting, finishing equal third in 1934, fifth in 1935 and 1936 and sixth in 1937. When Harry Collier retired in 1940, it was no surprise that Regan was chosen to replace him as captain.

After just two years as captain, however, Regan stunned the Collingwood committee in January of 1942 by resigning to pursue a religious life as a lay brother with the Salesian community at Sunbury. Regan had visited the community on many Sundays over the years, umpiring games and helping out the boys with football advice, but few at the club seemed to know his interest was serious enough to lead him away from the game.

A year later he joined the RAAF, and that initially meant he was able to come back to football, again as captain. But war duty kept him away from the game again in 1944-45, and by the time he returned for one final hurrah in 1946 he was 33 and never likely to regain his best form (though that last year did give him the chance to wear the 11thdifferent guernsey number of his career – still a VFL/AFL record). After retirement he captain-coached in Kalgoorlie and country Victoria, then later became secretary of the New South Wales Football League, and returned to Victoria Park in 1970 as assistant to general secretary Peter Lucas, a position which developed into that of football secretary. He held that post for eight years, during which time his sincerity, gentle nature and good humour won him widespread praise.

Regan was a much-loved figure at Victoria Park. And that affection had little to do with how good he’d been as a footballer: it was simply a reflection of his personality and character. If he had been around in 1996, he probably wouldn’t have been too fussed about missing out on the AFL’s Team of the Century. But those who saw him play were very fussed. For them there could be no doubt: Jack Regan was, and always will be, the finest full-back of them all.