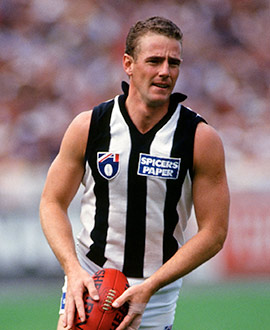 In an era before versatility was an AFL pre-requisite, Jamie Turner might well have been the ultimate utility.

Across 10 seasons and 160 games, there were few positions this adaptable, remarkably durable footballer wasn’t asked to play at stages of his career with Collingwood. He may not have mastered them all, but he was always ready, willing and able to play wherever his team needed him.

Turner ranged from playing on the wing to a running half-back, from the back pocket on occasions to the centre, even as a ruck rover at times. He could be swung around to various positions where the coach needed him, and on the most celebrated day of his career, he came off the interchange bench.

“I didn’t mind it, I like it (playing a variety of positions), it makes the game different,” Turner told the Herald Sun during his career. “It helps you, too. If someone is playing well in a position and you can’t get that spot, it’s good that you can play somewhere else.”

Turner always dreamt of emulating the feats of his famous father, Ken, who achieved the ultimate when he was one of Collingwood’s best players in the 1958 premiership side. He was even pictured as a young child in a black and white jumper kicking a ball in front of his father, while club greats Des Tuddenham and Harry Collier watched on.

But Turner’s pathway towards carving a successful career never came easily. He had to work hard for all that came his way, yet always put the team ahead of his own requirements

He was recruited as a teenager from Montmorency – another club with black and white stripes – to Collingwood in 1980. However, his under 19s coach, Keith Burns, had initial reservations on whether he was going to be good enough.

“He played pretty ordinary football,” Burns said of Turner’s first year in the under 19s. “But then Jamie worked his butt off over summer and ended up (as) captain next year. Players can always improve, especially if they have the right attitude.”

Turner’s father noted one thing during his time with the under 19s, telling the Sun newspaper years later that “he was always in there helping and shepherding and doing a lot of hard work and I think from that time that’s how he’s continued to play football – as a real team man.”

His graduation to training with the senior group brought with it a nickname that lasted nearly his entire league career – the slightly unflattering ‘Nerky’.

It came when Magpie veteran of the time, Ray Byrne. Turner recalled: “He (Byrne) kept on forgetting my name, so he called me Fred Nerk.” That was later shortened to ‘Nerky’, and some of his teammates called him that until he retired.

Turner had initially been “too skinny” to play against bigger bodied players, but went too far the other way when he tried to put on weight. It wasn’t until 1984 that he finally got his chance to play a senior league game – as a 21-year-old – after a strict diet saw him shed almost eight kilos.

“I was a big eater … I used to have a couple of toasted sandwiches at morning tea and a couple of rolls for lunch,” Turner said. “I wasn’t fit and I found, as the games progressed, I was getting tired and my skills dropped.”

That changed when he played 14 games in his debut year, including the elimination final against Fitzroy, and he won Collingwood’s most improved award.

But just as he had seemingly secured a spot within the senior team a debilitating back injury kept him on the sidelines for all but the final game of 1985.

Turner played 21 games in each of the 1986 and 1987 seasons, with the latter year being his best for the club. He was well rewarded on Copeland Trophy night in 1987, when he was third in the best-and-fairest, and he was adjudged the best clubman, as well as winning a second most improved award. He even polled eight Brownlow Medal votes and made the Victorian squad, though if he narrowly missed out on the team.

At the time, the Sun’sLou Richards, wrote: “Jamie Turner doesn’t get many wraps from the media, but whenever the coach gives him a job to do, he does it extremely well. If ever there was a kid who is a chip off the old block it is young Jamie, the son of Ken Turner, one of the ‘immortals’ who won Collingwood’s last premiership in, ‘sob’, 1958.”

Unassuming in the way he approached his football, Turner was described as “nothing flashy … in a working man’s club, he is a worker’s player – determined, dour and someone who is prepared to risk life and limb for his team.”

Turner was a consistent ball winner, having more than 400 disposals across four seasons (1987-90), although his kicking early in his career wasn’t as reliable as it could have been, evidenced by the fact a few of his teammates jokingly dubbed him ‘Apple’ – as in apple turnover.

His captain, Tony Shaw, said in his book, A Shaw Thing, “We always put s—- on him because he kept kicking the ball to the opposition  …. then we found out that he couldn’t see properly. He was as blind as a bat. He got contact lenses halfway through the (1990) season and his kicking improved out of sight, so to speak.”

That 1990 season would provide Turner, and Collingwood, with an incredible highlight, though it wasn’t without plenty of anguish: Brian Taylor noted in his book BT Diaries that Turner had been vomiting before the second semi-final, so apprehensive was he about possibly being dropped.

But he kept his spot, and did the same in the Grand Final a fortnight later, which meant he ended up playing every game in that celebrated season. While he didn’t have a massive impact on the game, he had joined his father as a Collingwood premiership player.

In the victorious rooms, he would say: “I thought I was going to run out of time to catch up with Dad (winning a flag). It won’t sink in for a while. After the game Dad just said to me: “You’ve won, you’ve won!”

Tony Shaw sensed Turner’s relief when he went over to him in the chaotic scenes in the dressing rooms, saying “Hey, bugger Kenny Turner, ‘Nerky’, this is us now.” He would say of Turner: “I reckon he could play anywhere (on the field). He just keeps getting the nut.”

Shaw also described Turner as “totally loyal to Collingwood” – and coming from his premiership captain, there can be no greater compliment.