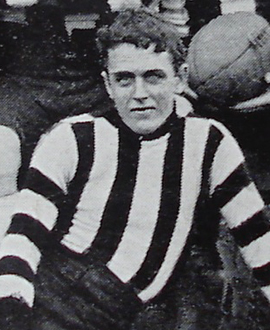 Jim Baxter had much for which to thank his older brother, Tom. For a start, Tom blazed the footballing trail for him, opening up a path to the Collingwood Football Club. But more importantly than that, Tom may very well have saved Jim’s life.

The incident came in 1905, when Tom, Jim and two others were working at the Mount Tarrengower mine, near their birthplace of Maldon. According to the Argus, the young men had gone back into a section of the tunnel where they were digging before sufficient time had elapsed for fumes to escape, and all four collapsed. Tom, however, was less affected by the fumes and managed to drag his companions to safety. The newspaper described it as “a narrow escape from suffocation”.

Two years later, Tom helped his brother to start what turned out to be a strangely stop-start VFL career. Tom joined Collingwood at the start of 1907 and immediately made a name for himself as a brilliant rover. Seven weeks into the season, the Pies decided to give brother Jim – known as ‘Boof – a crack at the big time. He was smaller and lighter than his brother but promised similar abilities – speed, skill, and a healthy dose of cheek.

These were times when players in the Bendigo league could play at home during the week and also play with the VFA or VFL at weekends, if they were good enough. And it looks as if that was what happened with Jim in 1907 – he played just the one game, without attracting much attention, and decided to stay at home playing one game a week.

A similar thing happened in both 1908 and 1909, Jim playing one or two games late in each season. By now he was recognised as a star of the local competition, the Argus describing him as “the acknowledged champion of the Castlemaine district”. And he began to make a mark at VFL level, both Baxters being named among the best in the Pies’ semi-final loss to South Melbourne at the end of 1909. After that game, the Australasian described Jim as “a quick, determined little player.”

But after four games spread across three seasons, that was the last VFL football Jim Baxter would play. Instead he joined Footscray in the VFA, where he spent five successful seasons. In 1911 he was rated the most consistent player for the season and was even given a handsome gold medal by a ‘local enthusiast’. The [Footscray] Independent rated him as the “most trusty performer for the season” and said he “was always to be depended on for a consistent and clever game.” He was first rover – and among the best players – in their losing 1912 grand final side and played a key role in their 1913 Premiership, playing all 20 games. Overall he played 80 games and kicked 82 goals for Footscray, establishing himself as an important and hugely popular part of the team.

He was so important to the ‘Scrays that they refused to clear him back to Maldon for the 1915 season when Jim wanted to go home. Jim went anyway and ended up coaching instead, playing some games late in the season and still starring.

He enlisted in the AIF in 1916 in Bendigo, joining the 19th reinforcements of the 24th battalion, having previously been knocked back for active service with eczema of the ankles. He joined the fight in 1917, but was discharged early in 1918 with defective vision, something he had battled since childhood but which had progressively become worse (when he’d tried to join a local rifle club as a youngster he was rejected because his vision wasn’t good enough to shoot). His required reading glasses were “below standard supplied by army”. In the end, he was abroad for only about nine months.

Like his brother, Jim Baxter was a smart, goalkicking rover who possessed pace, judgement and lots of skill. He was, according to one observer, “a plucky, determined player who gave his all from start to finish.” He formed a renowned roving combination with Footscray champion Roy Cotton, but Collingwood fans could have been forgiven for wondering if he might have been able to do the same with his brother at Victoria Park.