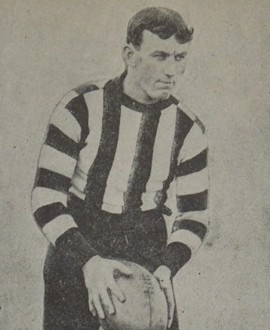 Speed, skill, agility, versatility, cleverness and a great footy brain – Jim Sadler had it all.

And he made the most of it too, one of a handful of Magpie midfielders who terrorised opponents in the years leading up to the First World War.

James Sadler came to Victoria Park from Allansford, near Warrnambool. He was recruited as a defender, and initially played as a half-back and then in the 1910 Premiership team as a back pocket player.

As a defender he was brilliant, timing his dashes out of the back half to perfection. He was a wonderful natural athlete and an excellent rower, and this combination of speed and strength marked him as a dangerous man to have charging out of the back half. In 2017 he was retrospectively declared the club’s equal best player (with Jock McHale) for the 1909 season, a year he spent mostly in defence.

Even so, it always seemed likely he would be better suited to the more open spaces further afield, and indeed he flourished when moved to the wing and roving. He was able to twist and turn within a small space and could run like a hare, leaving hapless opponents grasping at thin air in his wake. He used the ball beautifully too, whether with long clearing kicks from the back half or delivering to a forward.

One of his former teammates, Dan Minogue, was a big fan, and actually credited Sadler with having played the best individual game he’d ever seen, on the wing against Essendon at VP in 1911. “Jim, in a superlatively dazzling display, which he sustained throughout did everything that a class footballer could possibly do, beating pointless three opponents in turn. He was always good, but he was devastating that day as again and again he flashed the ball to the forwards. Sadler had a knack of standing flat-footed and baulking to confuse the man he wanted to pass. That day he never went wrong with this simple trick. Afterwards he was presented with the match ball.”

Sport newspaper agreed with Minogue’s assessment, labelling that game as the finest of Sadler’s career.

With Jock McHale in the centre and Percy Gibb on the other wing, Sadler formed part of one of the game’s most lethal centre lines in the early 1910s. He played for Victoria in 1911 and 1912 and continued to perform at a high level for the next few years. But he lost form and was hit by injuries in 1916, managing only six games. That prompted his retirement, but he returned for seven more games in 1917, enabling him to qualify for his 10-years service.

Upon his retirement he wrote this letter to the club: “After being a player for the past ten years I feel that I have had enough, and respectfully ask that you accept my resignation. I can assure you that the years I spent with the club were the happiest of my life, and I only wish that my career as a footballer was just starting instead of finishing. I take this opportunity to thank you for the many kindnesses I have received at your hands. I can say that I always got a fair deal. Wishing the club every success in the future, yours sincerely, J M Sadler.”

Unfortunately, Sadler’s retirement wasn’t quite the end of the story. Former skipper Dan Minogue, a close friend who worked with Sadler at the South Melbourne gasworks, had become intensely unhappy with what he felt had been the club’s unfair treatment of his mate. It was never clearly articulated, but he seems to have believed that Sadler wasn’t given the opportunities he deserved across 1916-17. So even though Sadler’s retirement letter betrayed no bitterness, Minogue was furious. And his fury festered while serving his country in France during the First World War. So deep-seated was Minogue’s anger that, when he came home in 1919, he stunned the football world by refusing to play with Collingwood, opting instead for Richmond.

So Jim Sadler played an unwitting role in one of the biggest controversies in Collingwood history. But today we prefer to remember his consistent brilliance as a player over 10 seasons and 135 wonderful games.