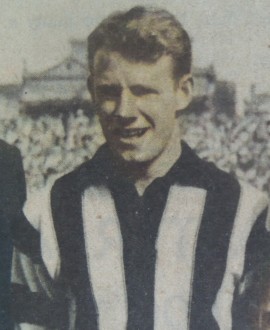 John Elder experienced a stop-start beginning to his brief Collingwood career – but it was hardly all his own fault.

His Victoria Park journey started in 1954 when the aggressive, hard-running half-back flanker from Wycheproof trialled with the Magpies during pre-season games. He did reasonably well, but not enough to convince the selectors to take him on.

Instead he returned to Wycheproof from where, after another strong season, he was asked back to Collingwood again for the 1955 trial games. And this time he had better luck – at least initially.

He did well enough to be chosen for the first game of the season, against Footscray at Victoria Park. And what an introduction he faced – running up against famed Dogs’ strong man Charlie Sutton. But the youngster did OK, especially in a match where the Pies were badly thumped. The Argus named him among our best players, describing him as “fearless and effective”, and he won respect for not backing down against the legend who just months before had led the Bulldogs to their first flag.

Such was the admiration he won that a ditty about him was penned in a mid-season club newsletter:

“John Elder is a recruit this year
In his first match he showed no fear.
Charlie Sutton tested him really well,
But John kept going to the final bell.”

Elder was desperately unlucky to be dropped for the second match, but he was back again as a late inclusion in round three against St Kilda. But then he ran into – of all things – administrative problems.

The Magpies had not secured a clearance for Elder, but had instead played him in those early games on match permits. But early in May the newspapers reported that he’d been forced to the sidelines because no further permits, or a full clearance, had been received for him.

By the time they came through he was back in the seconds and, having been forced to miss two senior games, was never able to force his way back into the firsts. Instead he had to settle for 14 games with the reserves.

That was hugely frustrating for the talented country footballer who had been educated at St Patrick’s College in Ballarat. But further frustration followed when the Magpies delisted him before the 1956 season. Luckily South Melbourne picked him up, and he managed 17 games across two seasons with the Swans.

He then played with Colac, before being recruited to Norwood in the SANFL for a single season in 1960. He finished his time there with a starring role for the Redlegs’ reserves in their Grand Final win over Port Adelaide.