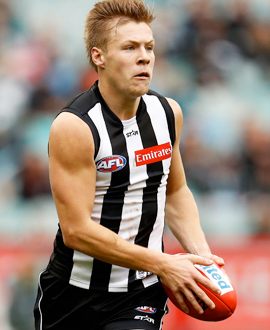 If Jordan De Goey thought that being drafted to the same club, on the same night as his good mate Darcy Moore was a dream come true, he had another thing coming.

With just one pre-season and three NAB Challenge games under his belt, De Goey was thrown into the deep end as he was named to debut in Collingwood’s clash with Brisbane in round of season 2015.

While pulling on the black and white stripes would have been a thrill, a green vest quickly covered the jumper De Goey was wearing for the first time. Playing as the substitute, he entered the game midway through the third quarter and collected five disposals as Collingwood claimed a 12-point victory.

Perhaps hard done by, the 19-year-old was omitted from the AFL side after his debut and began to display a significant influence in the VFL Magpies’ midfield.

He was named among the best players in all four of his VFL games, including back-to-back best on ground performances against North Ballarat and Essendon.

De Goey returned to the AFL side for Collingwood’s round seven clash with Richmond and this is where he stayed.

He played 11 straight games, was rested in round 19, and returned with a career-best performance in Sydney the following week.

The individual success wouldn’t end here. With Scott Pendlebury playing off half-back in the Magpies’ Friday night game against Geelong, De Goey was given his first real opportunity to play as a permanent midfielder.

The former Oakleigh Charger responded in the best way possible. His 25-disposal, seven-tackle and seven-clearance game was worthy of round 22’s National Rising Star nomination.

The accolades didn’t stop there for De Goey. At Collingwood’s annual Copeland Trophy event he was awarded the Harry Collier Trophy for the club’s best first year player.