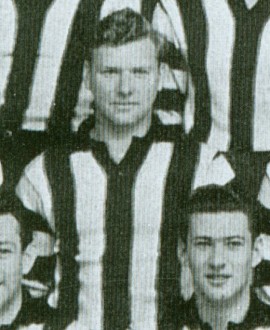 Few players have enjoyed a start to a career like Keith Batchelor. After just 10 games of VFL football the key position swingman had played in two grand finals – one at full-back and the other at full-forward! It was quite the start to a VFL career that lasted more than a decade across three different clubs, but never quite burst into full bloom.

The son of former Magpie Vin Batchelor (two games in 1924), Keith had a long, frustrating and finally remarkable journey to the elite level of Australian football.

The physically imposing key position player and follower initially appeared at Victoria Park in 1947 from Murrumbeena. In the next four years he played around 30 games with our reserves team (he would eventually total 52), before crossing to Carlton in June of 1951 after becoming frustrated at the lack of senior opportunities. But he didn’t have any better luck at Princes Park, and after 12 months playing reserves footy for the Blues, he crossed back to Victoria Park midway through the 1952 season.

There, after more games with the seconds, he was finally plucked out to make his debut – in the 1952 grand final! Writing in the Argus, Hugh Buggy described his selection as “the biggest football sensation of the year”. Essendon great Dick Reynolds described it as “a daring gamble”

The Age described him as a “fast-moving, vigorous defender who is good in the air.” The Argus said he was a “solid defender of the bustling type.” One of only five players to that stage to have debuted in the biggest game of the year, he was named at full-back that day and lined up against the great Geelong full-forward George Goninon. Batchelor battled bravely and never stopped trying but he, like his teammates, was eventually overwhelmed, and Goninon kicked five as his team cantered away to an easy victory (although journalists noticed that his first kick-in almost landed in the middle of the MCG).

One year later, and after just eight more games in between, Batchelor was back for another grand final against Geelong – this time at the opposite end of the ground, at full-forward! He had started the season in the senior team, playing mostly as a follower, but had played only once in 12 weeks leading into the finals. He was a shock call-up for the second semi-final, where he kicked one goal, and kept his place for the grand final as the Magpies battled a full-blown injury crisis.

The Age said the only real justifications for his selection were his kicking, marking and a half of football spent in attack against North Melbourne. “It would be unwise to expect too much from him.” But Batchelor defied his critics by booting a game-high four goals in the decider as the Pies outlasted the highly fancied Cats. It was a staggering performance.

“Keith Batchelor has come good,” said the Sporting Globe. “A spare parts player maybe, but a valued one to the Woods. His four goals two behinds were the result of good marking.”

That should have been the start of a golden period for Keith, but injuries seemed to stymie him at every turn and he managed only 11 more games over the next two seasons. He left Collingwood at the end of 1955 with only 21 senior games to show from nine years of trying (plus a reasonable career as a fast bowler with Collingwood in District cricket), but had better luck at North Melbourne, playing as many games in two years at Arden Street as he had managed in his whole career at Victoria Park.

And fittingly, his last game for the Pies – like his first – was a grand final, giving him a remarkable three grand finals from just 21 senior appearances.