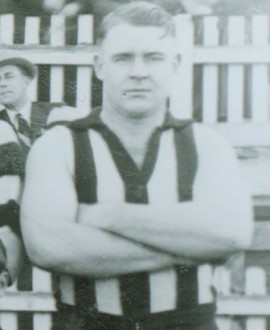 A burly follower with a great nickname, Keith Milte was one of those naturally talented country sportsmen who wasn’t quite good enough for an extended career at VFL level, but ended up having a fine spell in the VFA.

He came from Lascelles, a small town about 100km from Swan Hill. He was known there as ‘the Lascelles Lifter’, presumably because of his ability to ‘lift’ the teams he played for.

The nickname seems to have come mostly from his cricketing exploits, where he was a fiery left-arm opening bowler and big-hitting batsman described as a local ‘drawcard’. But for all his cricketing talents, it was football that first brought him to Melbourne, when he tried out with both Fitzroy and Geelong in 1937.

After being rejected by both he returned home and had an outstanding season, finishing second in the Ouyen League’s best-and-fairest count. He was invited back from another trial at Geelong, and this time made it to the senior list. He spent two years with the Cats for just one senior game, in 1938, before crossing to Coburg in the VFA.

South Melbourne sent scouts to watch him in 1941 but they were unimpressed, apparently “judging him to be below League standard”. But after a brilliant finals series, and a great grand final against Port Melbourne, Collingwood invited him to pre-season training.

Presented with his second chance at VFL level, Milte made an immediate impression. “Collingwood are heartened by the acquisition of Keith Milte, a big Coburg follower,” wrote the Herald early in the year. “Aged 24, and 6ft and 14st. 8lb, he will be one of the biggest players In the League, and add drive to the Colllngwood ruck.”

A fireman by profession, Milte was big and burly and a handful in the ruck. He was strong, tough, could take a solid mark and was a booming left-foot kick (one of his early kicks for the Magpies travelled from the centre circle to a couple of feet out from goal). He was also handy near goal, and an place kick at the big sticks.

After showing good from in the 1942 practice matches, Milte’s first opportunity came in the club’s fourth game for the season, against Hawthorn at Glenferrie Oval. The Argus said he ‘showed form’ in that first game. Later in the season he drew further praise, with the Weekly Times noting that the country product “is proving a capital follower for Collingwood”, while the Sporting Globe hailed his exploits against Essendon:

“The big follower was certainly up against a tough proposition in the Don rucks, but he gave a good account of himself. Milte continues to improve. There is nothing spectacular in his make-up, but his game is charged with plenty of honest endeavour.”

It was tough going at Victoria Park that year: the team won only two games for the season and Milte missed both of them. Still, a debut season that produced nine games and six goals seemed like a good foundation. But he could manage only one more senior game, for one more goal, in 1943. He trialled with Collingwood again in 1944 but was cleared back to Coburg for the 1944 season. He would go on to be an important player with the Lions, playing nearly 90 games and winning the best and fairest there in 1945 before retiring in the lead-up to the 1948 season because of a serious hand injury he’d suffered the previous year. He also coached the seconds.

In the end, ‘the Lascelles Lifter’ might not have taken the VFL by storm, but he did more than enough to make his home town proud – and his various football clubs grateful for his presence.