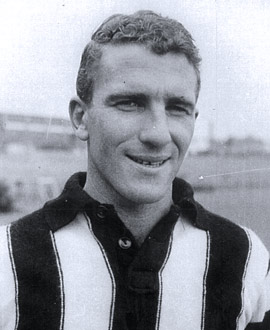 There has been no more important finals campaign in Collingwood’s history than the one successfully waged by the 1958 team. And there was no more important contributor to the Magpies’ ultimate success that September than winger Ken Turner.

Turner was among the best players in the badly-beaten semi-final side, completely outpointed North Melbourne champion Laurie Dwyer in the preliminary final and then capped off the perfect September with a 21-kick, 11-mark performance in the wet on Grand Final day that had his vying for best-on-ground honours with Thorold Merrett. Soon afterwards he won a black-and-white golf bag as Collingwood’s best player in the finals, and also finished second in the Copeland Trophy.

Not bad going for a bloke the club had dumped just three years before!

Turner had two big things going for him in 1958. The first was that he was one of the best wet-weather players Collingwood has ever known – and 1958 was seriously wet, especially September. The second was that he was the classic ‘big game player’: so many of his best games, from the earliest days of his career to the very last, came in finals or other crunch matches. Both those qualities served him well during a season that confirmed his standing among football’s elite.

Ken was a Collingwood supporter from birth, with two of his uncles, Stan and Percy Yates, having played for the Pies around the First World War. Ken was a talented young footballer but he had to stop playing at age 14 due to chronic heel injuries, so he focused on tennis instead (within a couple of years he was playing top grade metropolitan pennant competition).

By the time he was sent to Puckapunyal for National Service training in 1954, he hadn’t played footy in four years. But Carlton’s John James, who was also in camp, was impressed by Turner’s marking during some kick-to-kick sessions behind the barracks and suggested he should consider returning to the game. The doctors gave him the all-clear and Turner decided to try out with Collingwood’s under-19s. He managed seven games that year, and 17 in the reserves in 1955 without ever threatening for a senior spot.

But his career hit the crossroads at the end of 1955, when Collingwood dumped him from its list. He could have tried for another club or shifted to the VFA, but Turner desperately wanted to play with Collingwood. So he spent the summer in a specially devised footballers’ training program at a city gym. He then fronted back at Victoria Park for pre-season and convinced the club to give him another try. His form in the practice matches was blistering, and the selectors quickly backtracked on their decision to cut him.

Just five weeks into the season, Turner finally got his chance to pull on a senior Collingwood jumper. He was playing in a reserves’ game at Victoria Park when there was a late withdrawal from the seniors, so he grabbed a taxi across to Princes Park as a last-minute replacement to sit on the bench. And that’s all he did – sit on the bench. Three weeks later he made a genuine debut, against North Melbourne at Victoria Park, and his career was underway.

He became a regular almost immediately, most of his early football being played on a half-forward flank. He was solidly built, had good speed and was a long, raking left-foot kick. But the standout feature of his game was his marking: for his size, he was one of the best in the competition, and renowned for his capacity to take one-grab marks in even the wettest of conditions. That talent also translated into his skills at ground level, where he quickly gained a reputation as one of the better wet-weather ball-handlers in the game.

By 1958 he had moved almost permanently to the wing, where his safe hands often provided an outlet option for harried defenders. “For his size he battles strongly for marks that most players would concede, and his determination and intelligent disposal give his side many chances,” said the Sporting Globe. His pace and long kicking were also useful tools, and he quickly established himself as one of the form players of the season, leading many media awards deep into the year. “Ken Turner is having a great season on a wing,” noted Lou Richards in the Sun. “He shows more toe than a Roman sandal and can rise as high as mum’s sponge cake”.

“Herbie”, as he was known, carried that good form into the 1958 finals – and beyond. His heroics that September cemented his standing as one of the best wingmen in the League, and he continued to perform at a high level and with great consistency. He even spent some time in the centre. He played for Victoria in 1961, ’62 and ’63, was Collingwood’s deputy vice-captain in those years and finished third in the Copeland in 1961.

Throughout those years he maintained that reputation won in 1958 for producing his best in finals and other big games. “I don’t know why but I always seemed to be able to raise my game in the big ones,” he said. “I loved the challenge of those games – of lifting for the big moments.”

That trend continued until the very end of his career. He had begun to slow down during 1964 and found himself increasingly being pushed into defence, but his footy smarts still allowed him to thrive. There were plenty who doubted whether he’d go around again in 1965, but Ken responded with one of the best seasons of his career, playing all 20 games, finishing third in the Copeland Trophy and also being named the ‘most consistent’ Magpie of the year. True to reputation, he signed off by being the team’s best player on preliminary final day against Essendon.

And with that, Ken opted to go out while still close to his best. He joined the committee the very next year and gave a further seven years of service there. His son Jamie, later played 160 games with the Pies and was a part of the 1990 Premiership team (making Ken and Jamie the only father-son combination in history to have played in their club’s successive flag-winning sides).

Over time, the story of 1958 has come to focus on the physical havoc wrought by Murray Weideman, ‘Hooker’ Harrison, Bill Serong and others. But there was another, less feted, hero that day, and indeed that month – Ken Turner, who picked the perfect time to play the best football of his life.