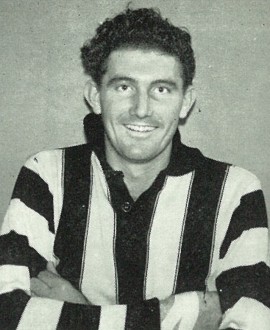 For one glorious month back in 1961, Kevin Pay was just about the hottest property in football – and, seemingly, set to be Collingwood’s full-forward for the next decade.

Sadly things didn’t quite work out that way. Instead, he would end up making his biggest footballing impact far from Victoria Park in an Australian football wasteland.

Kevin arrived at Collingwood from Kerang as a 20-year-old in 1960. He played 18 games in the reserves that year as he got used to the pace of VFL football. He was strongly built – one newspaper described him as “burly” – and adjusted quickly to the physical side of things. After just six games he was chosen on the bench to make his senior debut against North Melbourne at Victoria Park in Round 7.

But full-forward Ian Brewer was a late withdrawal through injury, and Pay came into the starting 18. Strangely though, given what was to come, he didn’t go to the goal square. Instead he started in a back pocket as the Pies reshuffled their line-up. It was a bleak day all round: the Pies lost by 16 points in what was described as a “humiliating” result. Pay’s debut attracted little attention and he was returned to the seconds for the rest of the year.

But 1961 was a different story entirely. There had been signs late the previous year, when Pay was played forward and kicked four goals in the reserves’ losing first semi-final team. By the third round of 1961 he was back in the seniors – this time as full-forward.

The Pies trekked out to the Western Oval to take on Ted Whitten’s Footscray, then on their way to a Grand Final appearance. Two hours later the Pies had gone down, but seemed to have found themselves a spearhead. Pay kicked a stunning eight goals out of his side’s total of 10 – he is one of only 13 players in VFL/AFL history to have accounted for 80% or more of their team’s goals in a single game.

It was a staggering virtuoso performance that almost single-handedly kept the Pies in the contest. In the final quarter Pay snagged four in five minutes as his team made a desperate late surge, two with beautiful long kicks from distance. The Age said: “Only the skill and accuracy of full-forward Pay kept the Magpies in the game. He kicked eight goals – four in each of Collingwood’s purple patches. Pay played a lone hand by capitalising on the chances presented when his side had the slight wind advantage.” The Sporting Globe said only Pay’s “brilliant kicking” had almost pulled the game out of the fire for the Woods.

Some of his goals came from strong marks and long, driving kicks, another when he bullocked his way through a scrimmage. It was a complete performance.

Pay grabbed another bag of six a few weeks later, this time against Essendon, and the Magpie selectors were sure they had the full-forward berth sorted for the foreseeable future. He had strong hands, could cover the ground well enough and was a magnificent kick. He was also strong in contests.

The rest of Pay’s 1961 season was less spectacular. He kicked three in one game and four in another, but there were more quiet afternoons than strong ones. In the end his 31 goals for the season was enough to win him the club’s goalkicking award, but the brutal truth was that nearly half of those goals had come in just two games.

Still, he was only young, and further improvement was anticipated in 1962. He was made vice-captain of the reserves and would go on to finish third in that team’s best-and-fairest from just 11 games. But he would add only five more senior games – and no goals.

With his senior career seemingly stalled, Kevin left to join Sandringham in the VFA. But after one year he turned his back on the VFA and joined Thornton-Eildon, citing an inability to get to training twice a week while he looked after his own trucking business. At just 23, and already running his own business, footy had to take a back seat.

But Kevin never lost his love for the game. By 1967 he had moved to Inverell in northern NSW, close to the Queensland border. In the decades that followed he would become a hugely influential figure in the local community. His local business, Blue Gem Contractors, would help refurbish a huge number of local sporting facilities. He helped establish the Inverell Tigers football club in the late 1980s, and was a big part of founding the Inverell Saints football club when they arrived in 2004. He would go on to be a Life Member of the Inverell Saints, the local Harness Racing Club, Jockey Club and Show Society, and he was given a community ‘service to sport’ award in 2018. The local race club even scheduled a ‘Vale Kevin Pay’ race during a meeting late in 2020, a few months after he’d died.

Kevin stayed involved with the Saints until his death in 2020, helping out and encouraging players of all ages. His son, grandson and granddaughter all played for the club too. He was an Inverell legend. And while he never quite achieved that status with Collingwood, he did have a couple of days out that rank right up there with the very best.