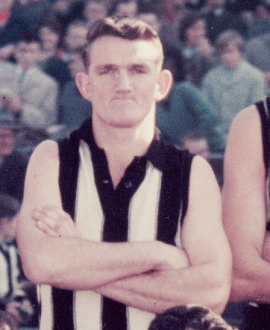 If the essence of football is about rising to the occasion, and giving your best when the greatest reward is at stake, then it’s no wonder that Kevin Rose ranks so highly at the Collingwood Football Club.

He might not have possessed the finest set of skills but Kevin Rose was a solid contributor who rarely let his teammates down in 10 seasons and 159 matches. Across that span of time he played in four Grand Finals – and he was a stand-out performer in all of them. Much later on he stood up again when the club needed him most – this time in his role as board member and president.

Kevin came to the club from Nyah West – following the same path as his more famous brother Bob had – and would be third of four Rose brothers to represent the Magpies in the seniors. He started with the thirds in 1955 when he was just 15, and was made captain of that team in 1957. For a while it looked as if his long apprenticeship would never end, but those doubts finally evaporated in 1958 when he played with the reserves, won their best and fairest and then managed his first senior games.

And what an introduction to senior football he had! Rose played his first full senior game in the 1958 preliminary final, after three previous appearances on the bench. He was terrific that day, and his efforts there were enough to earn him a starting berth on Grand Final day. And he was even better on that glorious day when the Magpies pulled off one of the greatest upsets in VFL/AFL history, forming part of a defensive unit that simply refused to be beaten by the supposedly superior Melbourne forwards.

Those early performances were telling for two reasons. The first was that they showed the wonderful competitive that would become his trademark. Kevin Rose hated to be beaten, and he would fight tooth and nail until he dropped rather than give up an easy ball to the opposition. He possessed neither the skills nor grace of many of his opponents but he could read the game well and was a sure ball-handler who rarely fumbled. He was fiercely determined, courageous, well disciplined and aggressive. In short, he was a “goer”.

The second thing those early games showed was his capacity for playing at his best amidst the fiercest pressure. Two years after his ’58 heroics he did it again – though this time his was virtually a lone hand in the 1960 debacle. And in the 1964 Grand Final he put in a blinder as ruck-rover, having Ron Barassi shifted from him. Many scribes — including Barassi himself—voted Rose the best player on the ground that day.

“I learned early just to play within my limitations, and to make the most out of what ability I did have,” Rose once said. “I guess I was never in the first three picked each week, but I still played a lot of games.”

That he did, at one stage playing 112 in a row. In the process he earned the respect of his teammates with his 100% performances. “What you got from Rosey on the field was what you got off it as well,” said former teammate John Henderson. “He was a good, solid, hard fair-dinkum guy.”

Most of his football at school and in the thirds had been spent at centre half-forward or centre half-back. But in the reserves he played mainly as a half-back flanker, and it was in this position that he got his first taste of senior football. Rose did not particularly like the position, and he struggled in his first couple of years. His lack of pace was exploited by opposition coaches and some nippy half-forwards, and by 1962 things were looking bleak. The club appeared ready to write Rose off as a reserves’ player, offering him permanent captaincy of the seconds.

That offer seemed to be the spur Kevin Rose needed. It made him even more dedicated and he worked even harder at his game, improving his kicking (notwithstanding a seriously ungainly style he was generally an effective kick) and general ball skills. At the same time he was helped by an important positional move, which saw him shift from defence to ruck-rover.

At just over 183cm (6ft) and 81kg (12st 11lb) he certainly had a good, solid build for the position. But the biggest benefit for Rose in ruck-roving was that it allowed him to exploit one of his great strengths, his reading of the game, and use his cunning and anticipation to make up for his lack of natural speed. He would modify his style of game depending on his opponent and the style of game the opposing team played. Against Melbourne, for example, playing a kick behind the play proved a profitable strategy. Essendon, however, moved the ball more freely and accurately, so Kevin found he always needed to be at the foot of the pack and at every contest. And the great thing about Rosey was that he made every contest just that — a contest.

Kevin did not miss a game from round four of 1962 until he retired at the end of 1967. During that period he was a model of consistency and reliability, but towards the end of 1967 both he and the club felt his form was tapering off and that it might be time to hang up the boots. He had not pursued carpentry after finishing his apprenticeship as a youngster, instead taking a job as a sales representative with a food company. Early in the sixties he had started his own food wholesaling company and this was taking an increasing amount of his time, so the gritty utility called an end to his VFL career. Fittingly though, his last League game, his 112th in succession, was one of his best — and again it was in a final.

In 1968 he went to Prahran, where he stayed for six years and two Premierships. One of those was in 1970, and only Ted Hopkins and some frantic Carlton handballing stopped he and brother Bob from snaring a unique VFL/VFA coaching double that year. He returned for a half-season at Prahran in 1974, before taking on a three-year coaching stint at Fitzroy during which the team did not finish higher than ninth.

The determination for which Kevin Rose became renowned also had its rewards outside football. The business he started from nothing in the early sixties became a thriving enterprise. In the 1990s he returned to Collingwood as a board member, and when the club was at a low ebb he took on the role as President. He then performed an  ultimate act of sacrifice, standing aside so that the Eddie McGuire-led revolution could have a clear run at things at the end of that decade.

That was typical of Kevin Rose. Interested only in the club, and the team around him. Not worried about the limelight or fanfare. The consummate team man – and a great Collingwood man – from start to finish.

To read about Kevin’s time as Collingwood President, click here