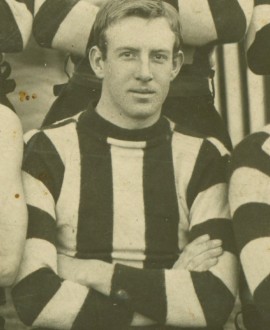 Lance (aka Jack) Mounsey’s time spent at Collingwood was only brief, but his links with the football club would last a lifetime. And his service to his country during the First World War, in particular the acts that won him a Distinguished Conduct Medal, would be something that the Magpies would take great pride in.

Mounsey played four games in black and white – all of them coming in 1912, in Jock McHale’s first season as coach.

Collingwood could not consider a handful of stars for the Round 12 clash with St Kilda, with the likes of Les Hughes, Dan Minogue and Ted Rowell being unavailable. That provided an opportunity for the new boy, who had been recruited from the Telegraph team. The 22-year-old forward had the chance to score in the second term but narrowly missed his shot. It would be the closest he would come to kicking a goal in his time with the Magpies.

He played in Round 13 against Carlton, in Round 14 against Richmond and in Round 18 against South Melbourne. That was the sum total of his senior career with the Collingwood Football Club, though he would still have some sporting prominence in Melbourne for his rowing exploits. He was an oarsman from the Mercantile squad, and his performances on the water might have won greater distinction had it not been for the outbreak of the First World War.

The Weekly Times explained in 1918: “He rowed in the stroke seat of the fine crew which won the junior eight at the last Henley regatta, and prior to that won a double maiden eight. It is likely that this crew would have made a name for itself in senior rowing but for the outbreak of war.”

Six of the crew mentioned enlisted in the AIF; two never made it home again.

Mounsey had been born in Allendale, near Creswick, but this telephonist with the Postmaster General’s office was living in Northcote when he enlisted with the Divisional Signal Company section in September 1915. His younger brother, Alexander, had joined up eight months before him.

He left Australia on the troopship Ascanius on November 10 that year, and headed to Egypt where he had plenty of experiences with past and present Collingwood players, including some former teammates. Mounsey served with distinction in France, and would be chosen to attend an officers’ training school in England at one stage during the war.

His work at Bullecourt in May 1917 brought about a bigger honour, the Distinguished Conduct Medal. The citation read: “For conspicuous gallantry and devotion to duty when in charge of telephone communication. When a signal station near to his position was destroyed by shellfire, he showed great promptness and resource in dealing with the situation. He laid a new line and was the means of re-establishing communication with as little delay as possible. He has always shown great skill and determination at his work.”

A newspaper article provided a few more details, saying: “he was concealed for six days in a dug out keeping up unlimited communication – he is a signaller – with various bases, while the Germans provided an incessant rain of gas-shells.”

His family and friends – and those who knew him at Collingwood – were exceptionally proud of what Mounsey had been able to do, and they welcomed him home as a hero in 1919.

Mounsey returned to rowing, not football, on his return and he went on to win “scores of regatta races in every division and in every class of boat.” He rowed for his state in the King’s Cup crews of 1922-23 and 1926, and would later become one of the leading rowing officials as well as a starter for the Head of the River races. He was still rowing in 1955 – 40 years after he enlisted – when the Argus did a story on him as he prepared to retire from the Postmaster General’s department after 51 years of service.

Mounsey was feted as being a part of “Australia’s oldest Sunday morning crew” – a group of ageing rowers who hit the water rain, hail and shine each weekend. One of those men who joined him each Sunday was 74-year-old Bob Rush – who had been a former player and veteran Collingwood official.

Mounsey’s links to Collingwood lasted long into his life, and he still had many long-time friends at the club when he died in 1970, aged 79.