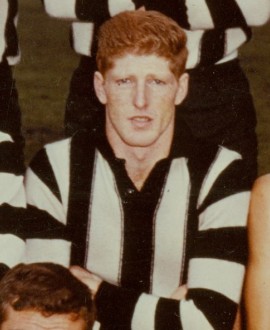 So when the club brands one of its own from that time as “possibly their most dependable footballer”, it is high praise indeed. And that’s the tag that was bestowed upon attacking half-back flanker Laurie Hill in the club’s 1967 Yearbook.

“Laurie is an excellent half-back flanker,” the publication said. “A good mark and a sure left foot kick, he is a strong player with splendid judgement and great anticipation. Collingwood regard him as possibly their most dependable footballer.

This was an assessment shared by outsiders, too. “He’s always been a defender but never a negative blocker,” wrote The Sun in 1967. “Will take risks and back himself to win the ball. Top notch defender with pace, marking power and a flair for launching attacks. Controls his long left-foot kicks well.”

Those observations sum up Laurie Hill’s Collingwood career to a tee. He was a reliable yet attacking defender who filled one half-back flank for the best part of a decade. In his 10 years at the club, starting with the under-19s in 1960, he always performed at a remarkably high and remarkably consistent level – especially from the time he made his senior debut in 1962. He rarely let his teammates down, and the gap between his best and worst performances was unusually low.

He was recruited from Wanderers under-17s in the Preston District and played 32 games across two seasons with our under-19 team (including the club’s first ever thirds Premiership in 1960). He also won the thirds’ best-and-fairest in 1961.

He made his senior debut against St Kilda in the opening round of the following year, wearing the #13 he would carry through the rest of his career. He was initially named as an emergency for the game but was called onto the bench when Ray Gabelich withdrew from the selected side on the day of the game. When full-back Peter Rosenbrock was knocked out in the first quarter, the red-headed Hill suddenly found himself thrown into the fray on a half-back flank – where he stood against another youngster in his first game, by the name of Darrel Baldock.

The Age liked what it saw from the youngster thrown into the big time. “Laurie Hill came on as a reserve in the first quarter,” it said, “and showed he could have the making of a League defender by his determination to stick close to an opponent.”

The paper was right in one way and wrong in another. Laurie became a regular in defence almost immediately, playing 16 games in that first season and going on to become one of the most trusted and valued defenders not just at Collingwood but in the whole competition. He was among the Magpies’ best in the heartbreaking 1964 Grand Final loss, the same year in which the magazine Footy Fan named him in its Team of the Year. He also pulled on the Big V guernsey several times. But it wasn’t just for “sticking close” that he won the plaudits – his attacking prowess also quickly became a trademark.

Hill played his 114th senior game for Collingwood in the opening round of the 1969 season against Hawthorn at Glenferrie. Collingwood lost by 22 points, and Hill was surprisingly dropped. He was so disappointed by the decision that he decided to walk away from VFL football and take up with Preston in the VFA, in an attempt to start enjoying football again.

He was far too good for that competition, winning the Liston Trophy in his first season and being part of a Premiership team. He ended up spending five years with Preston, won a second Liston in 1971 and also won two club best-and-fairest awards. After playing 84 senior games there, he finished his playing days with two years as captain-coach of Diamond Valley League club Watsonia in the mid-1970s. He is still regarded as one of the Bullants’ true greats: long after he’d finished playing he was inducted into the Preston Hall of Fame, and the Bullants also named the club’s best-and-fairest award after him.

Laurie Hill was only 26 when he left Collingwood, and he clearly had plenty of good football left in the tank. His experience and reliability would surely have come in handy during the finals series of 1969 and 1970, at the very least. One thing we know for sure from the rest of his career is that he wouldn’t have let anyone down.