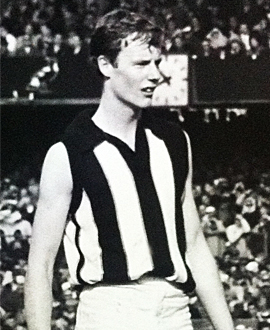 Anyone who ever saw him play would not be surprised to learn that the most dramatic moment of Lee Adamson’s career came at the VFL Tribunal. After all, Lee was a hard-at-it defender who was as tough as nails and loved making life hard for his opponents.

But in this instance Lee was an innocent and hard-done-by victim – falsely accused of racial abuse in a cynical ploy by a rival team (Carlton, of course) to get a player cleared of a striking charge before a Grand Final. Sadly, the ploy worked. Worse still, it took more than 20 years before Lee’s name was fully cleared.

All of that must have seemed a long way away when Lee Adamson began his football career. He grew up in Greensborough, on the outskirts of Melbourne, where his dad was something of a local footy legend (he may well have played League football but for the intervention of the second World War). Lee learned to take care of himself on the field as a teenager with Greensborough in the rough and tumble of the Diamond Valley League. While there he played alongside Ted Potter, with whom he would later forge a wonderful partnership in the heart of the Magpie defence.

He came to Collingwood in 1964, when he played 12 games with the under-19s (including a losing Grand Final) and nine with the reserves. In 1965 he split his time almost equally between the two grades, finishing runner-up in the thirds’ best and fairest and being part of the reserves Premiership.

To nobody’s surprise, he was elevated to the senior list for 1966, and made his senior debut against North Melbourne in Round 5. His first two games were played from the bench, but he finally got to start a game in Round 9 against South Melbourne, and kept his place for the rest of the season, including the Grand Final – a terrific effort (meaning he’d played in Grand Finals in each of his first three seasons as a Magpie).

Playing on a half-back flank, where he would spend his whole career, Adamson made an immediate impact. He was fast, attacked the ball hard, played close when he needed to and was happy to attack when he could. He was also very good overhead for his size. His style wasn’t always pretty but he was immensely effective, his long left-foot kicks quickly becoming a staple of the Collingwood defence. His love of the physical contest and willingness to throw himself into challenges initially saw him give away too many free kicks (The Herald noted he gave away 10 in the two finals in 1966), but it seemed a small price to pay for having such a tough and dashing defender in your line-up.

After one game, The Sporting Globe wrote: “There are many young stars in the new breed at Collingwood but there’s one real eye catcher – Adamson, who plays at half-back.” “He is a top flight flanker,” said The Herald. “He watches his man closely but still likes to have a dash down the field when he thinks the situation warrants it.” “Fast, fearless and doesn’t fumble,” said The Sun. “Don’t be fooled by that baby face and frail looking body: he is tough and fiery and soon lets an opponent know he is around.”

After such a wonderful first year, Lee looked likely to become a mainstay of the Collingwood defence for a decade or more. But after solid years in 1967 and 68, the injuries hit. He injured his shoulder in ’68, missed the back half of the ’69 season with knee trouble, had his 1970 campaign interrupted by a thigh injury and missed much of 1971 with broken ribs. He missed a further 10 games in 1972 and the first half of his final season, 1973. In all, he missed more than 50 games – more than two seasons – through injury.

But none of that would have hurt as much as what happened to him in the 1970 second semi-final. He’d been rubbed out for four weeks after a game against Carlton earlier in the season, so it was no surprise when he found himself in the umpire’s notebook again in the second semi, for charging his opponent, Syd Jackson. But Jackson was also reported, for belting Adamson in a separate incident.

At the tribunal hearing that followed, Jackson – on the advice of then Blues president George Harris – said he had struck Adamson because the Magpie backman had made a racial slur towards him. He pleaded extreme provocation. Sadly, the ruse worked. Jackson got off his charge, even though he would later admit that Adamson had never racially abused him at all. Lee also got off his charge, though legitimately.

Remarkably, even though he carried the stain of that accusation for years, Adamson never dwelt on it or sought retribution. And he never held a grudge. When the two players were brought together again by the Herald Sun in 2021 for Jackson to apologise, there was only forgiveness and tears. Lee by that stage had four Indigenous grandchildren of his own, and Jackson’s apology counted for plenty.

Lee had initially retired early in 1973 and returned to Greensborough. But he changed his mind and returned to Victoria Park after a few games, spending some more time in the reserves before playing the last eight games in the seniors. After that it was back to the Diamond Valley League, where he captain-coached Montmorency to a flag (he would later be named in their Team of the Century, and as its coach) and coached West Heidelberg. He then took his coaching skills back into the VFL, first as Collingwood’s reserves coach, then to Essendon as skills coach, then back to Victoria Park as reserves coach again. He was also a specialist coach during our flag year of 1990, and led the team when we played Essendon in the post-season game in London.

Lee Adamson had a fine playing career – one that would have been even better if not for all the injuries – and was highly regarded as a coach too, both locally and at League level. Overall he made a wonderful contribution to the game of football.