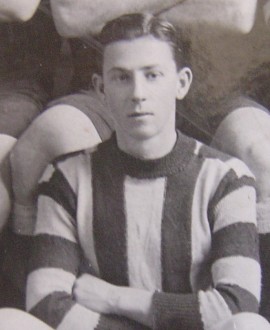 Leo Bird was part of one of the most remarkable – but least well known – family stories in Collingwood history. That story stretches back to the club’s earliest days in the 1890s, carries through until the 1980s and covers two sports – as well as a close connection with the hallowed turf of Victoria Park.

The story begins with Alexander Thomas Bird, who was known mostly as Tommy. He was involved with the Britannia Football Club, the junior club from which Collingwood was born. He was a councillor in the Collingwood City Council and ran a hay and corn store that was something of a local landmark (and which later became an equally well known Mobil service station). He became involved with Collingwood soon after the club was formed and stayed involved for many, many years, still accompanying the team on interstate trips as a friend of the club in the late 1920s. His brother Robert (Bob) played one game for the club in 1898.

A.T. Bird had nine children (two of whom died at a young age). Of the seven who survived to adulthood, two played senior football with Collingwood, another served in an official capacity at the club and two of the girls bore children who later played with the Magpies. It’s a remarkable record.

The two senior footballers were Leo and Tommy Bird. They were both similar in style – nippy, small, clever forwards and midfielders – but with differing personalities. Both were fast, skilled and loved kicking goals. They were very much local heroes, as they used to deliver wood and briquettes from their father’s store to houses in the area.

Leo, by far the quieter of the two brothers, spent a long apprenticeship, first with Abbotsford and then with the seconds, where he averaged almost two goals a game across three seasons. That goal sense stayed with him until late in life, winning a 50-yard goalkicking competition at a Past Players’ picnic in the early 1970s!

Leo made his senior debut in 1929, but that game against Essendon was his one and only for the year, despite The Sporting Globe saying that he had “shaped well on the forward line” in that first game. This was 1929, however – a season where Collingwood went through the home-and-away fixtures undefeated. The team at one stage went six weeks in a row without changes being made. It was arguably the toughest team of all time in which to get a break.

He fared substantially better in 1930, however, playing 15 solid games and kicking 10 goals after being finally granted an extended run in the centre when Jack Beveridge was disqualified. But he cruelly missed out on Grand Final selection when he was dropped from the team that played in the penultimate game against Geelong. Heavily disappointed, he crossed to Fitzroy midway through the 1931 season, where he played a further eight games and kicked two goals.

For Leo (and his brother), it was simply a case of there being too much competition for spots in a succession of Magpie teams that included not just champions such as Bill Libbis, Harry Collier and Beveridge, but other clever players like Norm McLeod, ‘Jiggy’ Harris and ‘Snowy’ Baker. Leo went to Preston, then returned to Abbotsford and would go on to captain-coach the side in the late 1930s.

Despite the disappointments for Leo, the Bird family connections kept building. Another brother, Les, played with the seconds and then became secretary to that team. One of A T Bird’s daughters, Ellen, married and gave birth to Brian Beers, who played in the 1958 Premiership side (and whose sons Mark and Tony also played with the club). Another daughter, Mae, married and gave birth to Kevin Wylie, who played 12 games in the 1950s. And Tommy’s son, Ron, became a wonderful cricketer who won the very first Ryder Medal for the best player in the Melbourne district competition.

Leo continued to work at the family garage for many years, the business still bearing the name of the man who started it all back in the 19th century. The dynasty gave Collingwood two footballers who played cameo roles in the four-in-a-row triumphs of The Machine. If fate had been kinder and they’d come along at a different time, the odds are they would have played many more senior games than they did.