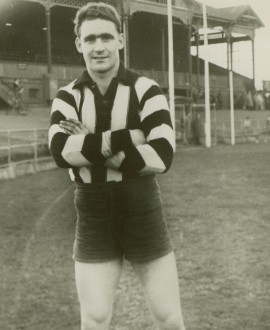 In October 1953, the Collingwood team that had won the VFL Premiership just a couple of weeks earlier were given a holiday in Tasmania as a reward. The players loved it. But one enjoyed it more than most.

Lerrel Sharp must have been rubbing his eyes in disbelief. Just 12 months earlier, the Tasmanian had been playing in a local grand final for Scottsdale. Now, just five games into his VFL career after swapping Tasmania for the mainland, he was a Collingwood Premiership player.

Luckily, one of the stops along the way for the touring Magpie party came in Scottsdale, and the prodigal son was feted like few before. He was given a special presentation by his former club and generally made to feel like a conquering hero.

In many ways, that’s what he was. Sharp lived in a little town called Cuckoo but started playing with Scottsdale as a 16-year-old, where he played under legendary Carlton hard man Bob Chitty, and alongside future Melbourne star Athol Webb. In 1952 he was part of Scottsdale’s first ever Grand Final team, but by then he was already on Collingwood’s radar. Magpie secretary Gordon Carlyon had made a trip to the Apple Isle in 1952 to check out a promising full-forward, but his attention was instead taken by a half-forward who would go on to become a wonderful defender.

Sharp arrived at Victoria Park early in 1953. He starred in the practice matches and looked set for a Round 1 debut until he injured his ankle at training. But such was the early impression he created that he was rushed into the senior team as soon as he became fit again – thus debuting without having played a reserves game. Unfortunately he re-injured the ankle in that Round 5 debut against Hawthorn, and missed a handful of games.

This was an injury-cursed season for the Magpies, and the curse worked in Sharp’s favour later in the year: after five games with the reserves he was thrown back into the seniors for the second last game of the season when the team’s already thin defensive stocks were further depleted by an injury to regular back pocket George Hams. And Sharp did so well then that he kept his place in the back pocket for the next four weeks, becoming a Premiership player in just his fifth game.

Kevin Hogan, in The Sun, said of him before that Grand Final: “Smart, well balanced little player who slipped into the team almost unnoticed, but looks like being hard to shift now that he has found a definite job. Is quick off the mark and turns as neatly as most of the rovers against whom he has to play.”

Sharp was a wonderful attacking defender who oozed class. He was good both in the air and on the ground, and his long kicking was a sight to behold. He was also blessed with superb judgement and anticipation, allowing him to know when to stay close and when to attack the ball. In those early games he tended to play closely and try to blanket the resting rovers, but as his game and confidence developed his natural flair came more to the fore. “His method of preventing opponents from getting the ball is to go for it himself under all circumstances,” wrote The Sun in 1955.

For a few glorious years he was one of the finest back pocket players in the game. He was brilliant in those first finals he played in 1953, and continued to be a reliable big game player. But he was also highly consistent week-in, week-out, and rarely played a bad game. He finished third in the Copeland in 1954, but his 1955 was arguably even better – he polled 12 Brownlow votes to finish outright ninth in the award and was named in a back pocket in Sporting Life’s ‘Team of the Year’. Victorian selection almost inevitably followed. The Magpies flirted with making him a rover during 1956, but it wasn’t a successful move (although it did enable him to kick his one and only goal) and he returned to the back pocket.

In 1958, though, the wheel of fortune turned. In 1953 he’d come into the team when the established George Hams got injured. In ’58, however, it was Sharp who got injured in Round 7. And his replacement, Ron Reeves, did so well that Sharp could manage only one more game for the year, missing out on a second flag. That proved to be the beginning of the end of Lerrel’s time at Collingwood, and he returned to Tasmania after two games of the 1959 season.

He joined North Launceston upon his return and would go on to become one of that club’s greats, winning two B&Fs, two NTFA Premierships and being named on a half-back flank in their greatest team from 1945-99. He would later be inducted into the Tasmanian football Hall of Fame, and would also establish a reputation as one of Tassie’s most colourful football characters, his love of a good anecdote making him a popular guest speaker at sporting functions around the State.

Football fortunes move in mysterious ways. And it’s almost spooky that the same sort of situation which gave Lerrel Sharp an unexpectedly early taste of Premiership success in his very first year would be played out in reverse five years later to first deny him a second flag, then hasten his departure from Victoria Park. That’s sport, sometimes. But for four years he was one of the finest back pocket players in the VFL, as well as a Premiership player, and he would remain a major figure in Tasmania for decades. That’s a wonderful legacy by any standards.