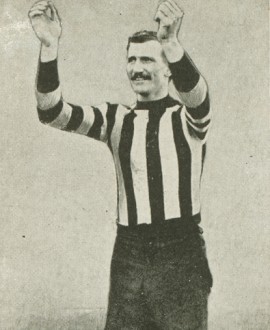 Collingwood has known plenty of gentle giants over the journey – names such as Ray Gabelich, Bob Heard and Graeme Jenkin spring readily to mind – but Les Hughes was the first to be given the tag, and he remains one of the most popular and good-natured big men ever to pull on a Collingwood jumper.

He was also one of the best. In a mighty career spanning some 15 seasons, Hughes amassed 225 games, kicked 175 goals, twice topped the club’s goalkicking and established a reputation as one of the finest tap ruckmen of his era. He was still playing at age 38, making him the second oldest Magpie of all time.

That’s a record any player would have been proud of, but especially so for someone who was dismissed by many observers as not being up to VFL standard when he first appeared at Victoria Park in 1908. To be fair he did look pretty raw then, having come from the Collingwood Trades team in the Wednesday League. He stood about 188cm (6ft 2in) tall, making him unusually tall for his time, and he looked awkward and clumsy from the get-go. His ungainly and apparently uncoordinated movements earned him the first and most common of his nicknames, ‘Flapper’ (the other, ‘Lofty’, simply reflected his height).

But as it turned out, Hughes was well and truly up to VFL standard: it was just that he needed more time to develop. That development never quite succeeded in removing all the rough edges from his game – he was never elegant, and his kicking was a truly mixed bag – but he still turned into one of the most valuable players in the competition.

As early as 1911, Sport newspaper was proclaiming him to be a champion ruckman. “His weight and size overpowers many opponents,” it said. “He is now a top-flighter, his hitting out to the rovers being clever and well timed.” The Football Recordalso noted the quality of his tap work. “He seems to have eyes all over his head and he smacks the ball … in whatever direction he sees a cobber ready to receive it. Like a staunch craft on a rough sea, buffetted and battling along, Les Hughes again proved himself a great ruckman.”

Another element of his game that stood out was his workrate. ‘Flapper’ was one of the hardest-working ruckmen in the game, and he would run tirelessly through a game from start to finish. This was particularly true in big games, and Hughes had a great track record in finals and clutch home-and-away matches. But there wasn’t much he could do in the infamously wild 1910 grand final: he was flattened before the ball was even bounced, and then decked for a second time in the final quarter.

His marking was another strong suit. He was not a sensational high-flyer but he used his height and great reach to outmark most players, sometimes literally reaching over the top of them to pluck the ball away. The Football Follower said he was “a wonderful high mark, who goes up for the ball like a Trojan”. Another newspaper said he provided “an object lesson to young players on how to bring down a mark”.

But for all his outstanding qualities as a footballer – and there were many – Hughes was just as fondly remembered for the way he played the game. He was good-humoured, kind and totally without pretension. “What a champion old ‘Flapper’ Hughes was and how he could laugh at anything humorous in the play,” theSporting Globewrote on his retirement. “A genuine sportsman, and one of the finest exponents of clean ruck play imaginable, he was an ornament to the game.”

“His place has always been where the battle has raged thickest and … it is not on record that he has once lost his temper,” ‘Leander’ wrote in the Heraldin 1921. “No better tribute can be paid to a ruck player than that he can go through a game with a smile always on his face and leave the field on cordial terms with his opponents. Hughes can claim this for himself, and his claim will not be disputed.”

As noted in the book A Century of the Best: “He revelled in football, and in the fellowship of life with his teammates on and off the field. He liked nothing better than to get away on trips with his colleagues, and he became famous on those journeys for his backing of the ever-present accordion players with his tin whistle. In 1919 when he captained a VFL representative team that played in Ballarat, he broke with tradition and drove several members of the side to the game in the motor-van he used for work.”

The Pies fans loved him, and the longer his career lasted the greater their affection became. For much of his career he was regarded as one of the game’s great characters. And like all great characters, odd things seemed to happen to him. In 1917, for example, he missed the train to Geelong with the team – and therefore missed the match – after being late for the bus that would have taken him to the station. A few years later he was again unable to make the trip to Sleepy Hollow, this time because of some urgent demands in his job as a van driver. Soon a rumour spread that, however improbably, Hughes would make a late arrival at Geelong by plane. It seemed crazy, but also just the kind of thing that Flapper could make happen.

During a pre-War match against University, one of his more wayward kicks sent the ball flying out of the ground and into the press box, where it bounced through a window of the lunch room, and rolled down the stairsnear the bar. “The reporters didn’t know for the moment whether some suffragette in a flying machine had dropped a bomb into their midst,” noted the Football Record.

When things like that happened, Hughes would just laugh. And everyone else would just say, ‘That’s Flapper for you’. Given his personality, it was no surprise that he became a publican after he retired, and he remained working in the industry into his seventies.

His genial nature and ready laugh sometimes disguised just how good a footballer he was. He won interstate selection a number of times, the last against New South Wales at the ripe old age of 37, and was voted Collingwood’s most consistent player in 1912. He was also, importantly, a key part of three Premiership teams. That’s a record to give any old player the last laugh.