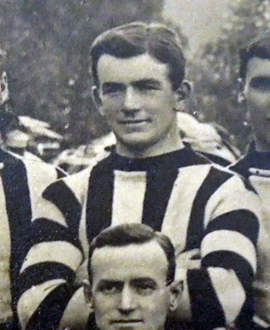 Collingwood had every reason to think it might have found a long-term football prospect in 21-year-old Lindsay Gordon Bristow early in the 1909 season.

Recruited from Allansford, near Warrnambool, the young farmer had performed well in back-to-back games of Round 2 and 3, against St Kilda and Carlton, and looked to be a player of promise.

The Argus forecast: “Bristow, one of (Collingwood’s) new men, excited much notice, both back and forward.”

What the journalist did not know was that Bristow – who preferred to go by his middle name Gordon instead of his Christian name Lindsay – had suffered an ankle injury during the game against the Blues.

It would cost him his chance of making a name for himself at Victoria Park.

In the week following the Carlton game, Collingwood lamented that its new-found defender-forward was facing a significant stint on the sidelines. It was said that Bristow had “hurt his instep against Carlton and when he tried to train against this week, his ankle gave way, and he is still “hors de combat”.

But if Bristow was “outside the fight”, as the translation went, he would be anything but in terms of serving his country, and the laurels would be far greater than sporting ones.

Almost six years after wearing the black and white colours, Bristow adopted khaki when he enlisted in the Australian Expeditionary Forces in January 1915, joining the 13th Light Horse Regiment.

He would be afforded a stirring send-off from the Allansford community in early Mayof that year when saying his goodbyes following his last leave from Broadmeadows.

A gala night of patriotic fervour and good wishes took place at the local Town Hall where Sergeant Bristow was presented with a “wristlet watch” which he insisted he would “ever prize” regardless of the outcome of the war.

His two brothers, Hugh and John, could not be there that night. They were serving on Gallipoli at the time, and it seemed certain that a third sibling was destined for those shores.

The Warrnambool Standard described the Bristow brothers as “fine, athletic reputable young men; for (Lindsay) Gordon and Jack were particularly good on the football field. No doubt they would gain distinction wherever they went, and Mrs Bristow should feel proud to have three such sons to go and fight for King and Country.”

The one-time Collingwood footballer sailed from Australia on May 28, 1915, on the Pensic, under no illusions of where he was headed, and he served with distinction on Gallipoli and later in France. Throughout his war service, which was long and distinguished, there were no signs of the ankle injury that had wrecked his VFL career.

Like his brother, John, he would win a Military Cross for bravery, after having earned a recommendation for the same such honour.

He was first recommended in March 1917, for his work during an advance from Riencourt, where he was described as having “proved himself a most reliable and efficient leader … most resourceful and sound in all undertakings.”

Then, as the Allied advances pushed the war towards a close, in August 1918, Bristow had a further Military Cross recommendation and this time gained what he should have from 18 months earlier.

His citation read: “For conspicuous gallantry and devotion to duty in patrol work. He twice reconnoitred the most advances infantry line, and sent back information which contributed greatly to the clearing up of an obscure station. He was wounded on the second occasion, but remained on duty while his task was completed and his final report despatched.”

Bristow was invalided to England with gunshot wounds to his right leg, yet still was able to return to his unit a month before the Armistice. He worked in the finance sector in London after the end of the war before finally returning home as soon as he could manage it.

He returned to the land on his arrival back in Australia and eventually took up an allotment of land at Derrinallum, in the western districts of the state.

That passion for the land, and for the men who toiled it, led Bristow to make a run for the seat of Corangamite in the 1934 elections, as part of the Australian Country Party.

He was unsuccessful, yet still served his country again a few years as part of a Garrison Brigade during the Second World War.

Sadly, Bristow’s Military Cross, and the rest of his war service medals, perished in bushfires that swept through his farm, though he would seek replacements medals in 1946.

He died, aged 72, in September 1960 – long forgotten as a Collingwood player, but not so as a brave servant of his country.