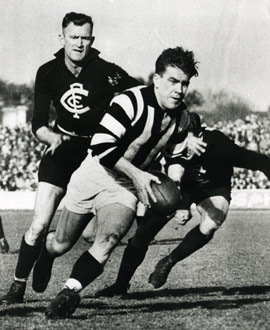 Lou Richards was almost certainly the mostly widely known – and most loved – footballer that Collingwood has ever produced. Even those with little interest in football knew of Little Louie, thanks to his career on radio, television and in the press.

In fact, he became so well known as a media personality that it was easy to forget what an outstanding playing career he’d enjoyed – 15 years, 250 games, 423 goals, four years as captain, including one flag, Victorian selection and thrice placed in the Copeland Trophy.

He was a gutsy, famously cheeky, rover with a keen eye for goal. And one of the best captains Collingwood has ever known.

“Lou was the best captain I’ve ever played under,” said Des Healey. “He was a magnificent team man and a real great Collingwood player — he could almost win matches for Collingwood on his own by getting the other players in.” Lou was simply a great leader said Thorold Merrett. “He was always firing you up, telling you to get up if you were hurt and urging you on from start to finish.”

One of the reasons he was such a success as skipper was that he was intensely passionate about Collingwood. That is hardly surprising, given he was following in the footsteps of his uncle Alby Pannam, plus Charlie Pannam Snr, Albert and Charlie Pannam Jnr.

But it wasn’t just those bloodlines, as good as they were. It was also because Lou was a local lad born and raised in Abbotsford, his first footy being played in the back streets of this most working class of suburbs. He attended the Lithgow Street State School before moving on to Collingwood Tech, the school which produced so many VFL footballers. These were difficult times in Collingwood; the depression was biting hard and it was a rough, tough neighborhood.

That grounding stood him in good stead at Collingwood Tech, where he had gone in the hope of continuing in the family electrical business. Despite being the smallest and youngest kid, he managed to get a game near the end of his first year there (1935). Placed in a forward pocket Lou (or “The Ant” as he was then known) kicked six goals and was chaired from the ground. The following week he played in one of the schoolboy curtain-raisers at Victoria Park and fell in love with the big match atmosphere. Now, more than ever, he was determined to follow the path of his bloodlines.

After three years learning the trade, Louie inflicted himself upon the industrial world where he was spectacularly unsuccessful. He was hopeless with tools and could not seem to get on with his bosses, who tried him in jobs as complex as making toothpaste tubes, and tapping pipes with a hammer to make sure they were sound.

On the football field his progress was decidedly more rapid. After leaving school he played with Abbotsford in the now-defunct sub-district competition. This was an open-age competition regarded as one of the roughest in the land, and it was heavy going for a smart-alec youngster. “It was the toughest football I ever played and it still makes me wince to think about it,” Lou said once. “To make matters worse, I fancied myself as a good player and had no worries about telling anyone within earshot.”

Lou survived, and learned. By 1940 his uncle and hero, Alby Pannam, thought he was ready for a run with Collingwood seconds. He enjoyed a good season, winning a silver cup as the team’s most consistent player, and was part of a Premiership side. After the grand final, in which Lou had played a wonderful game, senior coach Jock McHale walked up to him and said: “Well played today, son. You’ll be a Collingwood player.” Lou could scarcely believe his ears, but McHale was right. By the sixth game of the next season Lewis Thomas Charles Richards had forced his way into a Collingwood side depleted by war service. He stayed there for the next 15 years.

Bob Rose rated Lou alongside Essendon’s Bill Hutchison and Fitzroy’s Alan Ruthven as the best rovers of his time. Herald critic Alf Brown also believed Lou to be “a great little player — tough, fast and game.” He was not a rover in the classic mould, but a “bite ‘em, kick ’em, scratch ‘em” type who just hated to lose. He won plenty of the ball and kicked plenty of goals, three times winning the club’s goalkicking.

Lou would do almost anything to help Collingwood win and that would often involve trying to “suck” opposition players into fights and retaliation. There was no better man to do that, because Lou had the happy knack of being able to rile and infuriate opponents almost at will — as is evidenced by his seven visits to the VFL tribunal as a witness.

Lou was a regular in the seniors from his first game in 1941. He first played for Victoria in the 1947 carnival, where he very nearly won the Tassie Medal for best player. In 1952 he became captain, something which provided him with his greatest moment in football when he led the team to its 1953 Premiership (with brother Ron close to best man afield). By 1955 he began to think that the end might be approaching. He kicked five goals against St Kilda in round 14 but only a few weeks later, on the eve of the finals, called it quits after a particularly disastrous game against Essendon.

Lou was actually appointed as coach of the Collingwood reserves for the 1956 season. But Jack Dyer, who wrote for The Sun and broadcast games for 3XY, decided to go to England for a year and Lou, who had enjoyed a brief fling with the media in the 1955 finals, was asked to fill in. He promptly threw in his coaching assignment (without ever having taken charge of even a training session) and embarked on a remarkable career in the sports media.

When it comes to football and the media, Lou has done it all: there is no aspect of the media he has not touched. His columns and outrageous dares in The Sun became legendary, and also provided the vehicle for “The Kiss of Death.” On radio he was heavily involved in both broadcasts and post-match panel discussions. He was a match commentator with Channel 7, but it was his involvement with the long-running TV shows “World of Sport”, “League Teams”, “Wide World of Sports” and “The Footy Show” for which he is probably best remembered by Melburnians.

He was such a popular figure in Melbourne that he was made Court Jester for Moomba in 1972 (to John Farnham), then went one step better in 1981 by being crowned King of Moomba. He was awarded an MBE in 1982 for his services to sport, inducted to Collingwood’s Hall of Fame in the first intake in 2004, inducted to the AFL’s Hall of Fame in 1996 and received an AFL Lifetime Achievement Award in 2014. Not bad for a local lad from Collingwood Tech.

When he passed away just days after Collingwood’s 125th anniversary game in 2017, there was an extraordinary outpouring of warmth and affection for a man who dominated the football media landscape for so long. He was even given a State funeral. Lou Richards did it all in football, and he will always hold an exalted place in the game’s history – especially at Collingwood.