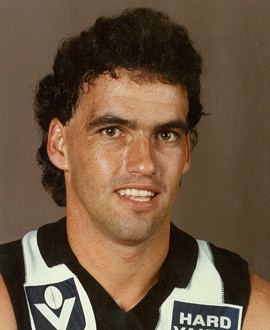 Mark Williams had a huge impact at Collingwood in the early 1980s, but even then his teammates knew he would likely have an even bigger impact as a coach. And they were right.

The man known universally as ‘Choco’ had ‘coach’ written all over him, for he was always one who took footy extremely seriously. He didn’t drink, didn’t smoke and was ahead of his time in terms of his commitment to what was needed to play elite level football: he was totally dedicated and professional in his preparation, play and conduct. Former teammate Brian Taylor once described him as “someone who just eats, lives and breathes the game – a football junkie.”

In 1985, the club’s magazine In Black & White wrote: “There is no such thing as a light-hearted conversation with him when it comes to football. He is intense even when answering the most trivial questions about the game. His obsession with football is undoubtedly a strength. He detests losing and hates playing badly. He loves winning and performing at his peak.”

While those words conveniently ignore the lively and outgoing parts of Williams’ personality (it was he who smuggled a black cabbage patch doll into the 1985 team photo), they do neatly sum up his approach to the game back then. That approach might have owed something to his background, because he came from SA football royalty. His father, Fos, was a legend in SA football, having played more than 200 games and won two best and fairests with Port Adelaide. He then captain-coached Port for nine years, coached them for a further 12 years (in all leading them to nine Premierships), then coached West Adelaide. No wonder he and his brothers, Anthony and Stephen, (who were also fine players) were serious about their footy.

And Collingwood were the ones to benefit. After an outstanding junior career, Williams found himself playing senior football at age 17, firstly with West Adelaide, then Port. He looked likely to head to Hawthorn but the Hawks lost interest just as Williams was becoming more and more determined to try his luck across the border. That’s when the Magpies stepped in. After winning all-Australian selection and a second flag with Port in 1980, Williams was ready to move.

From the moment he stepped through the door he was right at home, both at Collingwood and also in VFL football. He won the Copeland in that debut season and was also chosen to play for Victoria, starting a brief but glorious career in the black-and-white.

The key to his success in the VFL was that, unlike many previous SA recruits, Choco played a very Victorian style of football. He was desperate, a fierce competitor, a strong tackier and a player totally committed to doing the hard, team-oriented things. He gave his absolute all for the team every time he played, and wherever he played. Mostly that was as a ruck-rover, in the centre or on the forward line, but he also spent most of his 1985 season – during which he won his second Copeland – as a run-with player assigned to stars such as Leigh Matthews and Tim Watson.

He wasn’t a pretty or stylish footballer – his kicking style was actually ungainly – but he was certainly effective. Collingwood had no more gutsy or effective contributor during the first half of the 1980s. He was also more skilled than many appreciated, and actually finished ahead of Peter Daicos in a long-running goalkicking contest the two held before and after training sessions.

Still, it was his endeavour and effort and assault on the footy that most people associate with Choco’s playing style – and which his teammates loved. “He read the play well and attacked the ball like a maniac,” wrote Tony Shaw in his book A Shaw Thing. “Desperation-wise he is a bit more along my line of thinking about how a footballer should play the game. I like a bloke who plays like Mark.”

It was no surprise when he was made captain in 1983, and he spent four years at the helm, quickly winning a reputation among his teammates as an admired and inspirational leader. In addition to his two Copelands he also won awards for most courageous (after which he remarked that “courage is an indication of the number of times you get stitches in your head”), Magpie of the Year (twice), most consistent (twice) and even leading goalkicker. Despite those achievements he was still on a relatively modest salary at the end of his second contract, but he and the club ran into a dead-end when negotiating the third. That stalemate ended up with Williams crossing to the fledgling Brisbane Bears.

It was a move that nobody seemingly wanted. Williams would much rather have stayed. His teammates wanted him to stay too. Their admiration for him was obvious when his career ended four years later, after a game against the Pies in 1990. And he remains a fan favourite, their affection for him apparent again in 2014 when news emerged that Choco had been diagnosed with lymphoma. Magpie fans were amongst the first and most vocal to support him, even though he was involved with Richmond at the time.

By this time, Mark Williams had established himself as a big name in coaching. He’d started in the AFL with Essendon as an assistant coach, then moved to Port Power in the same role before taking over as their head coach in 1999. He stayed there until 2010, winning a flag in 2004, after which he spent time as an assistant with both Greater Western Sydney and Richmond. As a coach he became famous for his intensity, his insight into the game and his skills in educating and dealing with younger players.

The highlight of his coaching career came in 2004, when he led Port to their first AFL flag, after a couple of years of near-misses. His post-match antics (grabbing his own necktie as a middle finger to those who’d branded his team ‘chokers’, and his pointed words to club chairman Alan Scott) that day attracted plenty of criticism. But the real story was that Mark Williams’ Port Adelaide team had just beaten the Brisbane Lions, and in the process had protected the four-in-a-row record set by Collingwood’s mighty Machine teams in 1927-30. He must still get a buzz out of knowing that a Collingwood ‘insider’ was significantly responsible for protecting the club’s most cherished record. For one who still clearly loves the Pies, that is overdue reward for all that he gave while wearing the black-and-white jumper.