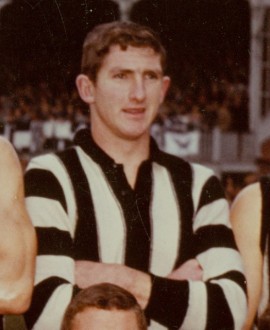 Mick Erwin started the 1962 season viewing it as a year of consolidation and growth. He’d just come off his first year at the club, where he managed 14 games with the under-19s and won selection in the under-19s Victorian team. He knew that if he had a good year with the reserves in 1962, senior selection might not be far away.

But he could never have guessed just how close it was. Because all it took was a single, solitary game with the reserves in the opening round of 1962, and the 19-year-old was catapulted straight into the seniors the following week.

It was quite the meteoric rise for Erwin, and completed what had been a dream 12 months for the kid from Heidelberg.

Mick had grown up supporting the Magpies, idolising Gordon Hocking at first and then later admiring the play of full-back Harry Sullivan, even though he himself was a centre half-forward. He’d first come to attention with Marist Brothers College in East Brunswick, where he played as a forward, and then with Heidelberg YCW before joining the under-19s.

Initially he played mostly in attack, and that’s also where he played in the 1962 practice matches. But then some bright spark of a selector decided to try him at full-back, and everything changed. A few weeks later, following a concussion to regular full-back Peter Rosenbrock, he was lining up against Hawthorn’s legendary full-forward John Peck (though Peck was moved into the ruck early in the game).

Things didn’t get much easier in the weeks ahead, when he faced first Laurie Mithen, of Melbourne, and then Geelong great Doug Wade, and did well against both. He was named among our best against the Demons, and also Footscray, and The Age noted his rapid improvement, saying he had “developed quickly as a full-back” and was one of the “finds” of the season.

Medium tall with a wiry, angular frame, Erwin was a tough customer in defence. He was a strong mark, a fine judge of the ball in the air and extremely competitive when the ball hit the ground. He also possessed a fine football brain – something that would help extend his football career far beyond his playing days. “Erwin is not a spectacular player,” wrote The Age, “but he sticks close to an opponent and uses spoiling tactics with good judgement.”

He played 13 senior games in that debut season – a fine effort in a key defensive post, although he was also tried at half-back late in the year. But he managed only seven more in 1963, finding himself in and out of the team and playing more at half-back. By 1964 he was being tried back in his ‘natural’ position up forward. He kicked 29 goals from 12 reserves games that year, winning the team’s best-and-fairest and leading goalkicker awards. But he managed only two from his six senior outings, again being in and out of the team, then two more from three games at the start of 1965, before being cleared to Richmond after Round 5.

That proved to be the start of a marvellous football journey. He spent a little over three seasons with Richmond, winning the club’s goalkicking award in his first season, which included a bag of five against Hawthorn. He was also a member of the Tiger reserves 1966 Premiership side which defeated Collingwood.

He crossed to Coburg in the middle of 1968 and led them, as captain-coach, to a second division VFA flag in 1970. He stepped down as coach in 1973 and continued as a player before moving to Port Melbourne in 1974 for two further seasons. In 1976 he took up a role as specialist coach with Richmond, then joined Prahran as their senior coach in 1978, leading them to a flag in his first season.

After four years with Prahran he moved back to Victoria Park as reserves coach in 1982. But he found himself thrown into the role of senior coach after just 10 rounds following the sensational sacking of Tom Hafey. The Magpies won three and lost nine of the 12 games for which he was in charge.

By the time the next season rolled around, the New Magpies were in charge at Victoria Park and there was no place for Mick Erwin. But he continued his work with the Merrett Hassett sports stores, and also became a respected around-the-grounds man covering the football on radio, mostly with 3AW. His son, Michael Junior, played three games for Collingwood in 1984 and 1985, as well as a swag of reserves footy, and then played for Sandringham, Port Melbourne and Box Hill in the VFA. Another son, Mark, would play for the under-19s. And Mick himself would go on to be a prominent figure with the Collingwood Past Players Association, spending some time serving as President.

In all, Mick Erwin made a significant contribution to the game of Australian football. He played top level footy with two clubs, was an outstanding player at VFA level and a highly respected coach in both the VFL and VFA. Throw in his radio work and his involvement with the Past Players, and it is a lifetime of service to football of which he can be justifiably proud.