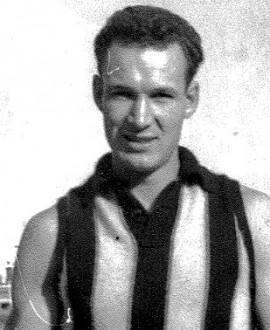 A high-leaping, athletic big guy who can take a mark, dominate the ruck but also play in defence sounds like a dream addition to just about any team.

And so it was with Neville Withers at Collingwood when he arrived at Victoria Park in 1959. It soon became clear to the Magpies that they had found a potentially special player. In the end, however, a succession of knee injuries would deprive both Neville and the club of seeing just how far he might have gone.

A northern suburbs boy, Neville went to Preston Tech, but was injured in his first game of footy there and didn’t play for another couple of years. In fact he wasn’t even that interested in footy at the time: his focus instead was much more on high-jumping. He was a gifted jumper who would at one stage register a six-foot jump using the old scissors technique. He made a jumping pit next to the family house and jumped every night after school for years.

Luckily, Neville’s brother Des kept playing footy, with local club Lakeside Rovers, and watching him one day piqued Neville’s curiosity, so he played a year with that club’s under-19s. He did well enough there to prompt his father to contact Neil Mann (who he knew through work) and ask if his boy could come down for a run.

Suddenly, all those nights on the jumping pit started to pay off in unexpected ways, and Neville found himself able to jump over almost all his new teammates, and most opponents as well. After spending 1959 with the under-19s, he graduated to the seconds in 1960 and after just nine games at that level made it to a senior debut against Richmond at Punt Road in Round 10.

Once there, his extraordinary natural leap – refined by years of athletics practice – continued to stand him in good stead. Few could out-jump him: fewer still could out-mark him. He stood around 189cm and, in addition to his leap, had seriously good hands. He was also a fiercely strong competitor, reflecting the lessons he’d learned from his dad. As he would say later: “I bumped hard and jumped high.” But he was also very mobile and athletic, and he did some professional running.

That combination marked him as a player of serious potential. He started out playing mostly as the back pocket resting ruckman, where he proved highly adept at stopping opposition attacks. When rucking, he proved highly effective in controlling the game and giving the team first use of the footy. When Graeme Fellowes went down with a knee injury midway through 1961, he took over as the team’s No.1 ruckman, after which he was named amongst the most improved players in the competition. The next year, 1962, he was the only Magpie to play every single game.

But disaster struck early in 1963. In the third game of that year, a Hawthorn opponent ran through him and pulled a piece of bone off his knee. Doctors didn’t find the damage for some time, and Neville kept trying to play on. It went again in a seconds game. Then on his first night back at training for the 1964 season he flew for a mark and damaged his cartilage. The subsequent operation became infected and left him with a loose knee. The succession of accidents left him with no option but to retire. He was just 22 when he’d played his last senior game.

He took some time off then captain-coached Eltham in the Diamond Valley League for a few years, but when he did his ‘good’ knee in a rucking contest early in 1969, knew it was time to give away the game for good. A toolmaker by trade, he spent 28 years building and developing off-road suspension systems. He was also a creative force in this area, inventing and patenting several different systems for off-road application.

If only he had been able to invent a way to restore his knee to ‘factory settings’. For a fit Neville Withers showed all the promise in the world of developing into one of the game’s more exciting big men.