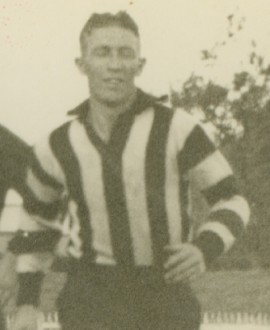 Throughout the early eras of football it was not uncommon for mistakes to be made with the correct spelling of players’ names.

Bruce Andrew was not aware that he had been selected to play his first game in 1928, as the morning newspaper recorded the Magpie newcomer as Andrews. Leo Wescott and Bill Sneazwell’s names were invariably misspelt in newspaper articles. The Collingwood four-in-a-row Premiership photographs were not immune either, with several errors occurring with the names recorded for posterity.

Norm MacLeod is a classic, little-known example. Throughout his six seasons at Victoria Park, he was continuously referred to as McLeod. Even the Collingwood record books and AFL archives featured this spelling of his name for many years. But his death notice in the Sun News-Pictorial in 1951 and his World War Two record, coupled with confirmation from family members, have shed light on this football misnomer.

Chances are MacLeod did not feel a compulsion to correct those who got his name wrong, because he was renowned as a “quiet, reserved and decent man”.

Born in Oakleigh in 1904, MacLeod played relatively little football as a youngster. He eventually took up the game with Balmain, in Richmond, and then spent two years with Aspendale in a local competition before heading to Northcote District. He first tried out for the Collingwood District team in the mid-1920s, and came under notice for the senior team in the 1927 practice matches. In one trial game it was reported that “McCloud [sic] featured prominently”, while in another he was referred to as “McLean”.

While reporters may not have known his name, they knew he had the skills to make a fist of his VFL career. He made his debut in the opening match of 1927, earning praise from the Sporting Globe: “McLeod [sic], an Abbotsford boy, … is a fast, clever wingman, who knows all the tricks of the football trade.” Syd Coventry said he was proving “a game, little dasher”.

Even in his earliest appearances, the traits that would come to define his play were apparent. He was super quick – good enough to win the Castlemaine Gift in 1927 and to compete at Stawell. He was also highly skilled, plucky, and had a happy knack of bobbing up in the right place at the right time.

After tasting senior football for the first three games in 1927, each time on a wing where the open spaces suited his speed, MacLeod returned to the Districts side. In 1928 he was surprisingly moved into defence but adapted well and managed to hold down a semi-regular senior spot (15 games). Still, the damage his pace could cause was too much of a temptation for selectors and he was back on the wing for the Premiership line-up. The next season he was cruelly given the boot for the Grand Final after playing every other game for the year. While ‘Jiggy’ Harris suffered the same fate and quit the club in disgust, MacLeod stood firm and fought to win back his spot. He managed 16 games in 1930, yet again missed the Grand Final team.

Despite those crushing blows, MacLeod loved his experiences with Collingwood. Although things didn’t always go smoothly. Once, while playing against Fitzroy, he and “Chicken” Smallhorn cannoned into each other in a sickening clash of heads, but the Magpie wingman continued to play on courageously after having several stitches inserted into the large gash on his head. A week or so later, members of his family started to complain of a strange smell coming from MacLeod’s direction. Closer investigation revealed that a tooth — Smallhorn’s tooth — was still embedded in the wound.

Still, MacLeod wasn’t complaining. He enjoyed a remarkable early run of success, playing in a Premiership in just his 18th game. And overall he played 58 games in six seasons, for 51 wins, six losses and a draw. That gives him a career winning percentage of 88.79% – still the highest such ranking amongst VFL/AFL players to have played more than 50 games.

Sadly MacLeod, a boot worker by trade, died a young man, of cerebral haemorrhage, the day before his 47th birthday. At least the death notices got his surname right.