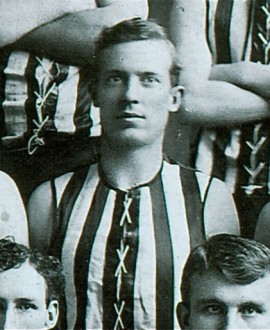 Collingwood has a fine track record when it comes to securing talented footballers from South Australia – and Oscar Hyman was amongst the very first to make that journey.

He was born in Mitcham, SA, in 1877 and became an established footballer with South Adelaide in 1896, aged just 19. He then went to work in the WA goldfields, during which time he played for both Coolgardie Rovers and Boulder City. In 1901 he came to Victoria, suiting up for Collingwood in his first year in the VFL.

Hyman was brilliant that year, playing mostly as a running half-back whose sparkling dashes out of defence made him a star. He capped off a stellar debut season, during which some newspapers named him among Collingwood’s best players of the season, with a magnificent performance in the losing grand final against Essendon. During the latter stages of that game he made a pulsating run down the ground which drew praise from all quarters as one of the highlights of the game, much as Phil Manassa would do in 1977.

“Hyman proved a distinct acquisition, and was a conspicuous performer in various divisions of the team,” wrote The Australasian, reviewing the season. “Oscar Hyman was brilliant. His dashes from the backline were magnificent,” wrote another scribe.

But just as quickly as he’d arrived in Victoria, Hyman left again. In 1902 he returned to South Australia to captain West Torrens, then transferred to North Adelaide for the 1903 and 1904 seasons. He gradually added versatility to his game, moving into the midfield and sometimes up forward. But Collingwood hadn’t forgotten him – something aided by his best on ground performance for SA against the Vics in 1903 – and when Hyman relocated to Melbourne with work in 1905, the Magpies stepped in to grab him for two more seasons.

He was still a brilliant defender, with sure ball handling and long kicking, and he had lost none of his pace. Speed had always been a key to Hyman’s play: he’d won the Sheffield Handicap, South Australia’s premier professional athletic event, in 1896, and competed there again in 1904. A month later he ran third in the Stawell Gift, an event he returned to in 1905-06.

But even his great athletic ability couldn’t save him during the biggest drama of his sporting career.

In August of 1905, Hyman played for Collingwood in a match in Broken Hill against a local representative side. But on the Sunday night, while walking through the city centre with teammates, he was struck by a rock thrown by a local lad. Hyman’s skull was fractured and he was hospitalised for a couple of weeks. The incident shocked the local community, and local newspapers went out of their way to express their outrage that a visitor to Broken Hill had been subjected to such treatment.

The story was big news in both Victoria and South Australia, reflecting Hyman’s standing as a footballer in both states. When the youth eventually appeared before court in November that year, he pleaded self defence, claiming that the quarrel had been caused ” by the aggressiveness of Hyman and the Collingwood footballers who were in his company on the night” and that he had been “very roughly handled by the Collingwood men”. The jury believed the defence, and the charges were dismissed.

Hyman missed the rest of the 1905 season but returned to the field in 1906, playing most of the games. Such was his standing at the club, and so highly were his leadership skills rated, that he was even considered for the captaincy when things turned sour for Dick Condon that year. In the end, though, the lure of home beckoned and he returned to SA in 1907 to captain Sturt. He also led the SA state team at the 1908 carnival (in all, he represented South Australia nine times) and eventually retired after the 1909 season, ending a much-travelled and highly storied career.

In 1916, in his late 30s, he decided to enlist – and actually paid £100 for the ‘privilege’ of a seat in a vehicle he’d helped buy for the Armoured Car Section (he was by this time a successful businessman and owner of several racehorses). He was appointed a Motor Transport Driver and taken on strength with the Armoured Car Section, arriving in Egypt in August of 1916, then soon after serving with the 11th and 12th Light Armoured Car Batteries in operations against the Senussi Tribesmen.

Hyman recorded his first Christmas overseas in a letter that was published in the Adelaide Register. He wrote how, 500 miles from Cairo and 150 miles from the Nile, he and his mates had been able to enjoy a wonderful Christmas Day thanks to the generosity of the Ladies Leagues of Australia. He described a day of sports (including a tug-of-war and donkey races), followed by a feast of “pea soup, roast turkey, baked potatoes, plum pudding, trifle, jelly, blancmange, and fruit, walnuts, almonds, raisins, and bonbons.”

Hyman served with the 1st Australian Light Car Patrol in Egypt, Palestine and Syria until the end of the Great War and returned to Australia midway through1919. He opened a billiard saloon in Unley, then became the Handicapper for the Tattersalls Club and later still the senior Handicapper for the South Australian Jockey and Adelaide Racing Clubs.

But Oscar Hyman always retained a soft spot for Collingwood. The club presented him with an illuminated address as a sign of respect on his departure, despite him having played only three seasons. Hyman maintained a close connection with the club, and in 1915 he provided a gold medal that was awarded to one of the best players of the season. The winner? One Jock McHale.