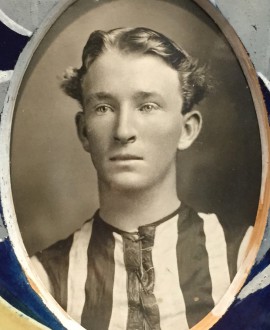 It takes an extraordinary amount of talent, resolve and mental strength for a young footballer to walk straight from a local team into a Premiership-winning VFL combination – especially mid-season.

But that’s just what the hugely gifted Paddy Gilchrist managed to do in 1910.

Patrick Gilchrist was born in Richmond but grew up in Mitcham. He started with Mitcham Football Club in the Reporter Football Association 1907, and by the time the 1910 season rolled around he was captain of the club – at the ripe old age of 20. He starred with Mitcham that year, playing mostly as a roving forward, and caught the eye of a number of VFL teams. When the local competition (which had only a small number of teams) finished in July, the Magpies pounced.

Gilchrist played in Mitcham’s last game of the season on July 16 – a losing challenge final to Camberwell. Incredibly, the very next week, he walked straight into Collingwood’s senior team for the Round 13 game against Essendon.

Victoria Park was a quagmire that day, but Gilchrist kicked a goal and generally looked right at home. The Argus said: “Gilchrist, a promising colt from Mitcham, who was having his first game, satisfied [Collingwood] as to his ability.” The Australasian said he had “made a very promising start with the team.”

Indeed he had – so much so that Gilchrist kept his place for the rest of the season, including the finals and grand final. And he quickly made a name for himself in that time as a talented and highly dangerous forward, kicking 11 goals in his nine games. A few weeks after his debut, the Argus noted that he was “brushing up into a highly capable player” and “looks like making a first rate player”.

Those thoughts were confirmed after the finals series, when he kicked seven goals in three games, including a stunning four-goal haul against Essendon in a semi-final where he “played havoc” with the Dons’ defence. In the Premiership match against Carlton, he lined up in the forward pocket alongside Dick Lee and kicked a goal.

Paddy Gilchrist was a brilliant footballer. He was highly skilled, a good ball-handler and had a great eye for goal. He read the play well, and seems to have had an excellent football brain. The Argus commented on his “nice clever football”. He was extremely dangerous around goal, and particularly adept at screw kicks over his head and snapshots – most unusual for the time.

In his first full season, 1911, he won a gold medal from the club for not missing a single training session. The Australasian proclaimed him “a star in front of goal” during this time, even though his kicking sometimes lacked accuracy. During that year’s grand final, he also became the first Collingwood player to ever wear the number 5 guernsey.

But his career never quite took off from there. In 1912 he was plagued by a series of muscle injuries and managed only eight games. He played the first game of 1913, kicking two more goals, but then decided to call time on his VFL career, finishing with 37 goals in 36 games.

He was cleared to Prahran in the VFA, and then to the Ferntree Gully Football Club, where the lure of employment and cheap accommodation through the local club’s President proved irresistible to a young tilemaker who was about to get married. He was appointed captain-coach of Echuca in 1914, but was refused a clearance and instead returned to suburban football. He had another crack at the VFA with Footscray in 1915 and showed good signs, but enlisted in January of 1916 and travelled overseas later that year as part of the reinforcements for the Field Artillery Brigade 6. He then headed to France, where he worked as a “mustered driver”, before returning to Australia in 1919.

His sporting career resumed almost immediately upon his return – though not with football as the main focus. Paddy’s main sport had always been cricket, and he was – and remains – a legend in eastern suburban cricket circles. Historians believe he took close to 1500 first XI wickets in his career as an opening bowler at suburban level, and took five wickets or more in an innings a staggering 155 times. He also took 10 wickets in an innings on at least three occasions, and half a dozen hat-tricks. Before the War he won eight out of nine Reporter Association bowling averages, as well as two A-Section batting averages (he ended up with eight scores of 90 or more, including one double century).

So it was little wonder that North Melbourne recruited him for a brief stint in District cricket in 1920, where he took 37 wickets in 19 matches. The highlight of his time there was when he took all 10 wickets in an innings of a representative game between North Melbourne and the Reporter Association – the very competition Paddy had dominated before the War! Even around 1930, as Paddy passed 40, he was dominating the VJCA with the South Melbourne Footballers cricket team, breaking all sorts of records along the way (in the mid-late 1920s he’d formed a particularly lethal opening combination with the legendary Roy Cazaly).

Local historians who have researched thoroughly believe that Paddy Gilchrist’s records make him one of the best local sportsmen of all time. His cricketing achievements are phenomenal, and his football exploits not far behind. Even today, he is a legend in Ferntree Gully and Mitcham for his suburban sporting exploits. But somehow you can’t help but think that Collingwood, and the VFL, never quite got to see the kind of career that his talent suggested was possible.