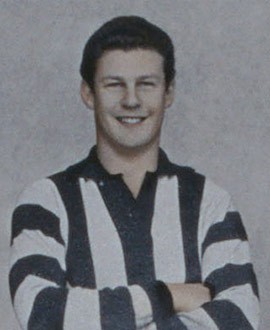 Another of the Twomey brothers, Pat had two stints with the Magpies, punctuated by a spell with country club Warragul.

He played mainly across the centreline or on a flank and started as a winger.

Fast and tireless, he was a long driving kick and a good mark who also had a good blend of toughness mixed in his game.

In 1952, the three brothers – Pat, Mick and Bill Junior – appeared together in the same side for the first time.

All three played in the 1953 premiership team, with Pat appearing on the half-forward flank.