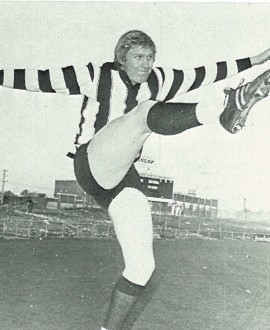 FOR A footballer who played only 32 games for Collingwood across three injury-interrupted seasons, Peter Eakins undoubtedly left his mark on the Magpies. Unfortunately it wasn’t necessarily the one that he or the club had planned.

For while he played in a Grand Final in his debut season of 1970, and won the club’s best first-year player, the headlines that came with his recruitment as well as his lucrative contract deal sadly overshadowed his playing career.

Collingwood’s decision to chase the young defender “at all costs” alienated several established Magpies, most notably captain Des Tuddenham and star ruckman Len Thompson, who were earning less than the first-year recruit. Tuddenham and Thompson went “on strike” for three weeks during the 1970 preseason. They returned to the club for the start of the season, but the episode didn’t really end there. Divisions fuelled by the incident impacted on the club at the worst possible time.

None of that was Eakins’ fault, and his teammates came to warm to his bright, engaging personality, even if the circumstances surrounding his recruitment unwittingly changed the (club’s) entire player payment structure.

Eakins’ shock of blond hair helped him make an immediate impression when he launched himself as a teenager onto the Western Australian football scene in the mid-1960s. He was only 19 when selected for Subiaco’s senior side in the opening round of 1966. In 1969, playing for WA, he dominated the Australian National Football Carnival in Adelaide, becoming joint winner (with Graham Molloy) of the Tassie Medal for the best player of the carnival.

That sparked a frenzy of interest from Melbourne clubs. Collingwood had traditionally refused to engage in bidding wars when seeking recruits, but Tom Sherrin’s administration was determined to take a more modern approach and offered Eakins a $5000 signing on fee, as well as the promise of $5000 a year for three seasons – considerably more than what Tuddy was seeking at the same time.

The Magpies were desperate for a defender, with Richard Stremski’s book, Kill For Collingwoodsaying: “The (Tom) Sherrin administration was determined to secure him (Eakins) at any cost.”

Tuddenham and Thompson were so incensed by the club’s inability to meet their financial requests – and by the money Eakins was rumoured to be getting – that they briefly withdrew their services. While they had no personal resentment against Eakins – Tuddenham later called him “a terrific bloke” – the wedge between some of the players and the Sherrin administration would be an on-going issue.

Eakins arrived at Victoria Park around the time of his 23rd birthday, armed with a big reputation, a job as a police roundsman with The Heraldnewspaper, and an infectious personality. A picture of his first session at Victoria Park in February 1970 accompanied a report on Tuddenham and Thompson failing to front. The two Magpie mainstays returned to the club for the start of the season, but Tuddenham lost the captaincy, which caused a serious ruckus that had a lasting impact.

Years later, Eakins could see why the unrest had started. “Tuddenham and Thompson were probably the best players in the league at the time. And here was this silly young bloke earning more than them.”

Eakins took a while to break into the Magpies’ senior team, due to injury. But when defender Lee Adams was suspended for the Round 9 clash with Essendon at Windy Hill, he got his chance. He had 17 disposals on debut, dragging down 10 marks, and the following week against St Kilda he was listed as second best for his team, having 10 marks, 20 disposals and kicking his one and only goal for the club.

Eakins was the classic dashing defender. Although tall and strong enough to fill either of the key defensive posts (he was a fine mark with unusually good judgement), it was his flair when charging out of the back line that really made him stand out. He was also a booming kick, and his charges out of defence would almost always be followed by a long punt upfield.

Eakins played 16 consecutive matches that season, locking himself into a back pocket role in the best team of the home-and-away season and winning the best first-year trophy. Of course he very nearly became a premiership player in that debut season too, only the heartbreak of losing a 44-point lead denying him that honour.

Incredibly, Eakins gained a sobering perspective only a fortnight after the Grand Final loss. He was working in the Herald’s police rounds office around lunchtime on Thursday October 15, 1970, when the West Gate Bridge collapsed, killing 35 construction workers. He was one of the key reporters who covered that story.

One of his media contemporaries, Geoff ‘Chook’ McClure, described how “(this) blond footballer with Hollywood looks would take young bucks under his wing and show them how to get a good story and later, how to have a good time, mostly using techniques that were not in the journalism manual.”

He was a good-natured teammate, who used to joke with teammates on bus trips going home after matches that he was always good for a loan. And in late night poker games, he “lamented that he had lost $200, but would try to make it up the following weekend by picking up four extra handballs.”

Eakins’ 1971 season got off to a frustrating start. He suffered a bad hamstring injury in the club’s first practice match and didn’t resume in the seniors until Round 9. Further injuries and more inconsistent form hindered him in 1972 as well, as he played only three senior games in the last of his three-year arrangement with Collingwood.

And with that, Eakins’ career at Collingwood was over. Collingwood’s first foray into high-priced interstate recruiting had been a costly, and failed, experiment.

Workmate and friend, sports reporter Ron Reed, said later: “‘Eako’ wasn’t the greatest footballer ever to wear the black and white. He could play alright, but his striking appearance and mop of blond hair may have had something to do with him winning the Tassie medal, which theoretically made him the best in the land for a week or so.”

Eakins returned to Perth, but more injuries hit him and played only one senior WAFL game – and some reserves football – before retiring at 26.

His career flashed brightly and briefly like a comet. Sadly, so too did his life.

Having become a successful businessman and hotelier and president of the WA Hotels Association, Eakins was struck down by cancer. He died on July 4, 1999, aged only 52.

Just a few years before his death, Eakins did something he swore he wouldn’t – he watched that 1970 Grand Final.

“It wasn’t until I’d had a good drink that I turned it on one night and I ended up watching the whole thing,” Eakins recalled. And while he was happy with his own game (he’d kept Percy Jones goalless) he must have wondered if he would have been remembered differently had the Pies gone on to win.