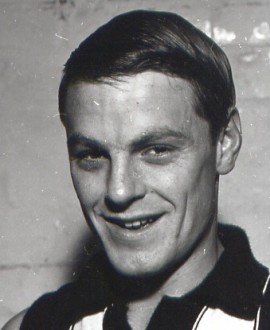 Robert Farmer was the classic sporting story of the child prodigy who could have been anything, but who ultimately found the transition from junior star to senior ranks too difficult to navigate successfully.

Few Magpies have burst onto the scene with such a buzz of expectation as Farmer did when he debuted in 1964. He was only 16 and still attending Heidelberg High School when he was chosen, and word quickly spread that this kid was special.

The previous year, he had won a local junior competition best and fairest award with 42 votes out of a possible 45 (he would probably have scored the maximum possible but he was reported in one game and could not receive votes). By then he’d already attracted the attention of Magpie scouts through a series of brilliant performances for a Victorian schoolboys side. If there had been a National Draft in those days he would have been a clear #1 pick.

To make things even better he was a good-looking, blond-haired forward who loved kicking goals. As far as exciting packages go, they don’t get much better than that.

Despite his age he never played for the under-19s. Instead he went straight into the reserves at the start of 1964 – a sure sign of how highly he was rated. Just six weeks later he was making his senior debut on a half-forward flank against North Melbourne. It was in some ways the perfect game in which to make a ‘soft’ entry into League football: the Magpies had a huge win, with Terry Waters kicking seven and Dave Norman six, and young Bob was able to get on the scoresheet as well. He did so again the following week against Richmond, but after a disappointing game against Melbourne on Queen’s Birthday was sent back to the seconds for the rest of the year. Collingwood would later report that he had taken the disappointment “like a man”.

He returned to the seniors the following year – again, against Melbourne. But this time he did much better, kicking a goal and breaking even against the experienced Don Williams. He played even better against South Melbourne the following week, kicking two goals against another good opponent in Paul Harrison. “Revenge is sweet, and Farmer was justified in being pleased about his form,” noted Footy Week. “He had shown that he has what it takes to be in the big time.”

His reward after the South game was remarkable – being asked to fill in for coach Bob Rose on Coaches Corner on Channel 7’s World of Sport. The 18-year-old handled the occasion with remarkable assurance.

Two weeks after that he played probably his best game for the Pies, kicking a career-high four goals as part of a multi-pronged attack against that year’s eventual Premiers in Essendon. But he faded towards the back end of the season, and was dropped for the finals.

The next two seasons were frustrating. There were glimpses of his undoubted talent but they were infrequent and irregular. The selectors began experimenting with his position in a bid to bring out his best (centre half-forward, half-forward flank, centre half-back), but the frequent changes potentially unsettled him even more.

There seems little doubt he was a forward at heart. He stood around 6’ tall and weighed 12 ½ stone, was beautifully, if finely, built and was a magnificent mark with a good leap and very sticky hands. In 1965 his marking was said to be of the same quality as that of the great Terry Waters. He was a nice long kick, though he could be a bit unreliable at times, and had a very attack-focused game.

But Bob was learning that talent will take you only so far in the game. Nobody doubted his natural ability. But he seemed to lack the discipline or commitment to hard work that turns talent into performances. Some wondered if success had come to easily for him as a junior to understand what was needed to make it at the elite level. Others wondered if all the early publicity had gone to his head. Other observers noted that he was something of an in-betweener at VFL level: not quite tall enough for a key position and not quite quick enough for a flank.

Either way, at the end of 1967, his career seemed to be at the crossroads – despite still being only 20. He responded with the best, most consistent season, of his career, playing 19 games and kicking 22 goals. He also represented the Australian Galahs against the touring Irish team. There was genuine optimism that the penny had dropped, and a corner turned.

But he played only seven games in 1969, bringing up his 50thalong the way (he would end up having played a similar number in the reserves along the way), and left to play with West Adelaide under Murray Weideman at the end of that year. He would later play with Coburg in the VFA.

In the end, it’s hard to escape the feeling that Robert Farmer’s story is largely one of unfulfilled promise. He had all the talent in the world, but never really managed to get the best out of himself. Had he been able to do so, it’s likely we would have seen something special.