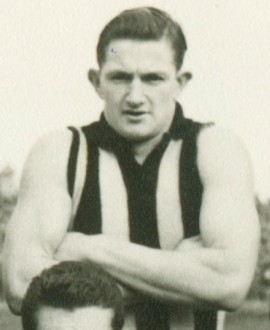 Having a “good football brain” can be the difference between a player enjoying a long and illustrious career, or falling by the wayside. It enables a player to read the game better, to know that split-second earlier what others are going to do and to judge more accurately where the game is going and what needs to be done.

Ron Kingston was one of those lucky enough to be born with a good head for football. His former teammates all used to comment on his football nouse. “I’ve never played with a bloke who could assess a game like Ron,” said his long-time defensive partner, Frank Tuck. “You’d come off the ground at the end of a game and he could tell you how many kicks you had, what you did with them — the lot. It was amazing.” Bill Twomey Jnr said Kingston “knew the game of football backwards”. Harry Sullivan said Kingston had the best football brain of any player he had ever seen. “He could tell you what you did, where you went wrong and what should have happened.”

Kingston (or “The Lizard” as he was sometimes known) would himself later admit that his ability to “read” a game was crucial to his success. “Honestly, if I didn’t read the game well I was in terrible trouble” he says. “I would not have survived in one-on-one situations if I hadn’t used my noodle.”

Kingston did survive, for ten years and more than 170 games, to win a place in Collingwood’s history as part of the club’s famed defensive unit of the 1950s.

He first appeared at Victoria Park at the start of the decade, having played junior football with the Wanderers Athletic club in the Preston District Junior Football Association. Ron grew up in and around the northern suburbs, his parents moving regularly to accommodate their increasingly large family (they eventually stopped at 12 children).

Although he grew up surrounded by Collingwood people (also in his fourth grade class at East Preston State School were future Collingwood players Arthur Gooch and Kevin Darrigan), Kingston himself hated the Magpies and barracked for — of all clubs — Carlton.

When Kingston first played for the Wanderers’ under-16 side he was a solid little kid of just 12. “I looked like a runt compared to the rest of them” he says ruefully. “People thought I was the mascot.”

He grew substantially in the years that followed, and in one season he played part of the year with the under- 18s and enough games in the under-21s to qualify for the finals — and finished runner-up in the best and fairest awards of both competitions (beaten in the older age group by future teammate Bill Tebble).

He was not overly tall, at 179cm (5ft 10.5in), and, like Tuck, was frequently called upon to play on taller opponents. These he often played from a distance, using the space between him and his man for a run to leap and spoil. Such tactics rely heavily on a player’s judgement and his reading of the game; it says much for Kingston that, in his hands, they usually worked. If not, however, Kingston was quite comfortable playing it close and tight, restricting his opponent’s flight to the ball. He was quite robust, at times weighing up to 82.5kg (13 stone). But he never looked heavy, as a lot of the weight was in his sturdy legs. Carrying his weight low to the ground like that made him a difficult customer to shift or outmanoeuvre in ground battles.

His clearing kicks were a highlight, with Peter Lucas once describing Kingston as probably the best drop kick in the League. The Sporting Globe also proclaimed that to watch a Ron Kingston drop kick was to watch “a master craftsman at work”.

Kingston was a cabinet maker by trade and, though that work sometimes interfered with his football training commitments, he missed very few games in the fifties. But he was cruelly denied a place in 1958 because of injury, like his good friend Tuck. In 1957 he had finished second in the Copeland Trophy as well as gaining interstate selection.

Kingston’s game was never one likely to attract headlines. It was not always pretty football he played, but it was effective. As The Herald’s John Dunn said in 1956, Kingston was “a fighter”. “He never gives in, and when he’s on the football field he’s plugging hard for Collingwood for the full 100 minutes,” Dunn wrote.

And as any coach will tell you, that is just the sort of bloke you want to have in defence.