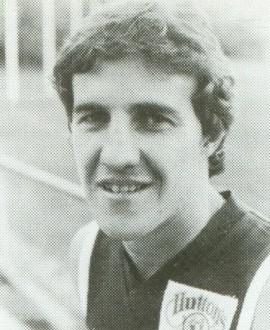 There aren’t too many players who have managed to be a part of two premiership sides – even if those successes didn’t come at the senior level.

But that’s an honour belonging to Russell Jessop, who played in our under-19 premiership side in 1974, then two years later was part of the reserves team that also won a flag. In between he’d started a senior career that ended up only stretching to five senior games with Collingwood, but would later see him become a fine VFA and local player.

Jessop joined Collingwood from local club Thornbury as a 16-year-old in 1974, playing 14 games on his way to the premiership (his brother Gary captained that team).

He spent the next year developing further with the thirds, before finally getting a chance with the seconds in 1976. But so good were his performances there that he was also elevated to the seniors for three games late in the year, making him one of the few players to have played in all three grades in the one year.

Jessop was a nicely built player who found himself used all over the field. In the under-19s flag he’d played on a wing, but in the reserves triumph he played in a back pocket. But his real talent lay on the forward line. Former teammates remember him as a clever player with good goal sense, decent speed, a fantastic leap and wonderfully strong hands. He wasn’t tall enough for key position but was mobile, skilled and ‘played tall’.

His debut came against Footscray in Round 20 of 1976, as the Pies began to blood some youngsters at the tail end of a disastrous season. Wearing the No.49 guernsey he managed only nine disposals from the wing, but kept his place for what would prove to be a career-high 15-disposal, six-mark game as a makeshift back pocket the following week against Essendon. He stayed in the last line of defence for the final game of the season.

Remarkably, despite making his senior debut that year, he still managed to finish fourth in the thirds’ best and fairest.

It looked like 1977 would shape as his breakout year, but despite two more senior games, it never quite happened for him and his impact on the two games he did play was limited. He did, however, finish runner-up in the reserves best-and-fairest.

He was named on the supplementary list for 1978 but left early in the season to join Preston in the VFA, where his career really took off. He was an outstanding, clever half-forward with Preston, and was named in a VFA representative side that played Queensland in his very first season. He repeated that feat against Tasmania in 1981, kicking four goals. That was the last of his four years with the Bullants, and he kicked 27 goals in just nine games before missing the second half of the season through injury. He later showed he’d lost none of his goalkicking instincts when, a few years later, he kicked 103 goals in a season with Lalor in the Diamond Valley League.

In the end he’d totalled 48 under-19 games and 31 reserves outings for the Magpies, to go with his five senior appearances. But maybe he just needed more opportunities up forward to have really left his mark.

A tally clerk on the wharves for more than 30 years, Jessop was a popular figure and regarded as a fine clubman wherever he played. And his former teammates were deeply saddened midway through 2018 when they learned he had succumbed to cancer. He was just 60.