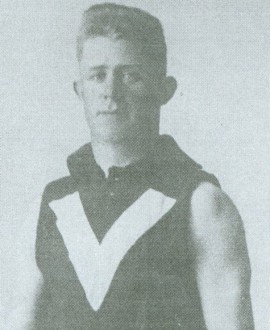 Stan McKenzie was one of those players that Collingwood selectors used to hate reading about.

He was a tough, hard-running defender who was a star with Hawthorn in the VFA and VFL, winning selection for Victoria on several occasions. Before that he’d filled a similar role with North Melbourne in the VFA.

The trouble is, before that he was a Collingwood player – and the Magpies let him go.

McKenzie was born at Myamyn, a small country township between Hamilton and Portland. He came to the city when he was about 13 and settled in Collingwood. He didn’t play much football, and took up coach building as a profession.

In 1915, aged 18, he enlisted with the fighting forces. He landed at Suvla Bay, just to the north of Anzac Cove, in August of that year and was evacuated a few months later. He continued to serve as a driver with field artillery batallions until he returned to Australia midway through 1917.

But McKenzie told the Sporting Globe years later that he was restless and found it difficult to settle down after he came back. Luckily, one of his friends in Collingwood was a cricketer named Les Keating (a famous district cricketer who played for both Collingwood and Richmond for many years). The two of them were watching a VFL match together one day when McKenzie remarked that he didn’t think the standard was very high. “I think I could play as good as some of these fellows,” he remarked to Keating. The cricketer laughed, and challenged McKenzie to have a go himself.

McKenzie decided to have a run, and picked up the game incredibly quickly. So much so that, after just a few months with Port Melbourne Juniors, Collingwood’s selectors picked him on the training list for the 1918 season. He managed his first senior game in round two, at half-back, and ended up totalling nine for the season. It was an incredible rise in less than 12 months, and the Football Record remarked: “Returned Soldier S. McKenzie is entitled to the full measure of pleasure that is to be got from football. He was away with the soldiers for nearly three years. He is regarded as a very promising man on the back line.”

But Collingwood couldn’t see past the rough edges that were – understandably –still in his game. As a result, they let him go before the 1919 season, where upon he was snapped up by North Melbourne. He was a key part of the very good North Melbourne teams of 1919-20, and was even appointed coach of the team in 1921. When North disbanded midway through 1921 (due to a failed attempt to merge with Essendon), McKenzie transferred to Hawthorn.

It was at Glenferrie that Stan McKenzie really shone as a footballer, and showed the football world what Collingwood had let slip. In 1922, 1923, and 1924 he was regarded as one of the most reliable defenders in Association football. He won Hawthorn’s Most Consistent player award in 1922, and in 1924 was named in the combined Association side. In 1925, Hawthorn’s first year in the VFL, he played his best season of football ever – regularly among the best players, named again as Most Consistent and three times chosen for Victoria (the first Hawk to achieve that honour). Strong, robust and rugged at the ball, he showed in 1925 that he was right at home in the hurly burly of VFL football.

The Sporting Globe described his style of play in this way: ” Strapping at 12.10and being 5ft. 8in. tall, McKenzie is a sturdy block on the field. His snowy hair makes him a conspicuous figure, and he is easy to distinguish. Played on the half-back wing, he has become famous for his dash. His determination in going through crushes, and the clever manner in which he handles the ball on the ground make his play effective and attractive. McKenzie believes in keeping in front of his man all the time, and at the same time judging the flight of the ball.”

Unfortunately, that was where Stan McKenzie’s VFL career ended. He was a postman by this time, working on the Richmond rounds with his old mate Les Keating and living in the same street as former Magpies Dan Minogue and Billy Walton. But Australia Post transferred him to Ballarat and also made him work on Saturday mornings, bring a premature end to a League career that had only really got started as it was nearing its end.