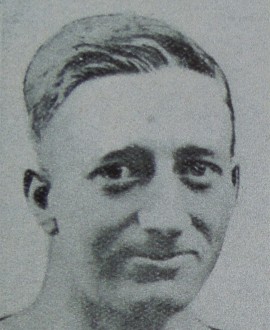 Not even the most ardent Collingwood fan fancied the team’s chances in the opening round of 1924.

For a start, the club was still rebuilding after a period that had seen it lose half a dozen of its best players. To make matters worse, the team had been hit by injuries in the lead-up to the season, and there was a new captain, with Charlie Tyson replacing Harry Curtis. And our opponents in Round One? Essendon – the reigning Premiers – at Windy Hill.

Nobody gave the Magpies a chance. But two hours after the Bombers had unfurled their 1923 pennant, one of their defenders misread the bounce of the ball and a Collingwood debutante named Syd Burt dashed in to kick the last goal of the game, sealing a nailbiting win for the underdog Pies.

Burt’s goal sparked wild celebrations, with young boys jumping the fence and rushing onto the field with the game not yet over. In the rooms afterwards, Collingwood President Jim Sharp hailed the victory and paid tribute to the youngsters – including Burt – who had come to the fore when the team was depleted.

But Syd Burt wasn’t a youngster. In fact, he was 27 years and 275 days at the time of that momentous debut, making him the 15th oldest Magpie to make his senior VFL debut (excluding VFA years). And he’d already hoed a hard road to get to the VFL.

William Sydney Burt was born in the year of Collingwood’s VFA flag, in 1896. His father had arrived in Australia in the 1850s and by the mid-1870s the family were living in Collingwood. But by the time of Syd’s birth (he was one of four) the family were living in Burwood, with his father having been made an early headmaster at Glen Waverley State School.

He enlisted with the armed forces in 1918, at age 21, and served more than a year in France as a gunner, returning to Australia in 1919. He played his local football at Ivanhoe, where he gained a good reputation as a ‘stout defender’. But it was still a surprise – and perhaps a reflection of the depleted state of Collingwood’s list – when the Magpies asked him down to the practice matches before the 1924 season.

Burt played well in a drawn game against Collingwood District and was invited to keep training. He did so well in the ensuing sessions and practice matches that he that ended up being named in the team for the opening game. And the initial reviews were highly encouraging.

The Argus said Burt showed ‘decided promise’ in that first game. The Australasian said he ‘shaped well’ in the same game. The Football Record said he stood up to the heavy work well. And The Age said he “should prove useful in future matches.”

He played the first three games and was dropped, but returned in Round 14 with his best game in the centre against Carlton. He was a star that day against the Blues, and was named among the best players. By now he had been moved from defence into the midfield and it was there he found his niche. He was strongly built, a good runner and attacked the ball hard. He was a long kick, though not always accurate, but he proved to be a useful asset in the middle of the ground where clashes were often at their fiercest.

Two weeks after his outstanding performance against Carlton, Burt was carved up by the great Carji Greeves. But the Pies persisted, and he held his place in the middle for the remainder of the year. He started there again in 1925, playing two of the first three games. But he was one of six players dropped after the round three game against Hawthorn and never played for the Pies again.

It’s not clear what happened to Syd Burt’s football career after that. But he was closing in on 30, and his career as a clerk would have been taking off (he spent most of his working life in the banking industry). He was married the next year and had eight children, though only five survived early childhood.

One of his sons, Russell, trained with Collingwood but didn’t make it to senior ranks. He ended up being a successful footballer with Ivanhoe in the amateurs, however, where he played with a cousin, Dave Burt, who himself managed one game with the Pies in 1957.

So the Burt name continued to have a presence in football long after Syd Burt finished a VFL career that started later than most, lasted only 10 games but still featured a role in one of the club’s most famous wins of the 1920s.