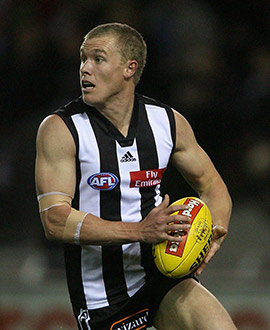 Lockyer had played senior football with East Fremantle before having a year on the Collingwood rookie list in 1998. He broke into the senior team in round eight of the 1999 season on a bitterly cold May afternoon against the Dockers and held his spot from then onwards.

His disposal was so good that he was entrusted with kick-ins and it was said that Lockyer had been able to kick with either foot in the backyard at the age of three.

Lockyer usually lined up in the back pocket or half-back flank and his skills made him a handy member of the Collingwood defence.

He had an outstanding 2000 season and went from being a bit player to be one of Collingwood’s most valuable contributors with dash and poise from defence.

After finishing as runner-up to skipper Nathan Buckley for the Magpies’ 2000 best and fairest award, a horrible clash with teammate Jarrod Molloy in round 20 put an end to Lockyer’s 2001 season as he spent the last two weeks out with concussion.

In addition to taking on any role in defence, he could also lend a hand in attack.

He finished fifth in the 2001 best and fairest voting and a place higher the following year to confirm his importance in the Magpie set-up.

After playing in Collingwood’s losing 2002 Grand Final side, Lockyer ruptured the anterior cruciate in his right knee in round three and had to undergo knee reconstruction surgery. Then he injured a foot in his comeback in February and did not return until round nine of 2004.

It took him a while to settle back in, but by the end of the season his courage and accurate use of the ball were once again prominent.

He ran equal second in the best and fairest after a sensational year in 2007 and also finished in the top 10 in 2008 and 2009, by which time he was being used primarily as a small forward.

In a reverse of his bad injury saga he did not miss a game from mid-2004 til early 2010, racking up 136 in a row before losing his place as young players were pushed through.

He retired at the end of the season and was immediately given a position on the coaching panel. Lockyer led Collingwood’s VFL team in 2011 and 2012 before becoming Midfield Development Coach in 2013.