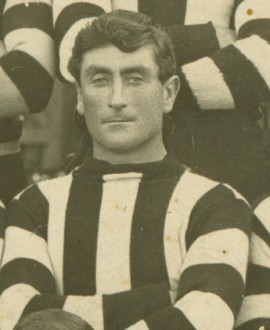 More than 1200 men have pulled on the Collingwood jumper since the club’s first outing in 1892, and few have been able to rival Ted Rowell’s heady combination of exceptional on-field achievements, longevity, and colourful side stories. Star forward, champion defender, coach, renowned sprinter, goldfields explorer, singer, bookmaker – Ted Rowell did it all.

But one of his more enduring claims to game is also one of his least well known. It came in his very last game, the 1915 Grand Final. Ted had actually been out of the game for a year by this time, having retired at the end of 1914. But Magpie selectors pulled one of the shocks of the season when they recalled Rowell to play full-back in the 1915 decider, despite it having been more than a year since he’d last pulled on the boots. In fact he hadn’t even seen a game in 1915, as his burgeoning bookmaking business took up more and more of his time.

Collingwood lost that match, but Rowell was – amazingly – amongst the best players. More importantly, that game allowed him to claim the title of the oldest player ever to pull on a Collingwood jumper in a VFL/AFL match, at 39 years and 94 days. It’s a record he still holds, and almost certainly always will.

That was a suitably remarkable way to end a truly remarkable career that began in the quaintly-named Butchers’ Gully, just outside Castlemaine, where Ted was born back in 1876. Soon after he left school he succumbed to the lure of the 1890s gold rush in Western Australia: the boat trip to Fremantle took 12 days, and Coolgardie remained a further two train trips (and then some) away. The final 220-odd km of the journey was completed part on brumby pony and part on foot, and all in extreme heat.

Rowell never had much fortune finding gold, but he was a gambler by nature and always figured that was part of the adventure. But he had better luck in the thriving Goldfields sporting environment. He played in the first ever football match at Coolgardie, won numerous hurdle and sprint races and starred at cricket. Plenty of talented footballers had made their way west seeking their fortune – Essendon’s legendary Albert Thurgood among them – but Rowell soon established a reputation as one of the stars of the competition. He was fit, fast and strong, had pace to burn and could kick the ball a mile. He kicked plenty of goals in WA, and eventually decided to try his luck in the VFL after an ex-Geelong player in the west, Joe Marmo, told him his talents were being wasted there.

Rowell was courted by several clubs but opted for the Magpies, and he made an impact almost immediately with his strong marking, blinding pace and great kicking. Played mostly at half-forward in his first year, Rowell led defenders a merry dance and ended up with 31 goals in his first season, enough to take him to third place on the VFL’s table. It was a wonderful first-up season.

But if his first season had exceeded expectations, his second was something else again. On the field he took his game to even higher levels, kicking 33 goals from half-forward to jointly secure the league goalkicking title (with his old goldfields opponent Thurgood). He starred in Collingwood’s first VFL Premiership, goaling with a long, long last-quarter place kick that ended Essendon’s resistance. Football historian C C Mullen would later judge Rowell to have been the ‘Champion of the Colony’ that season, and he would later win Collingwood’s retrospective Best Player award.

But 1902 also brought with it the first taste of Rowell’s extraordinary ability to attract attention, even when he wasn’t trying to. Critics opened up on him after a rare poor performance against Fitzroy early in the season, with the Argus describing his performance as “useless” and “too bad to be true”. But worse was to come, with accusations emerging that he had taken a bribe to play dead that day. Rowell was outraged by the suggestions and immediately resigned on the grounds of “ungenerous treatment by outside barrackers”. He fronted the committee the next week and delivered a statutory declaration supporting his story (he had suffered two heavy blows early in the game), after which the club completely exonerated him.

It was a messy incident, but fortunately resolved in time for the club’s historic trip to Tasmania, where he was one of the main instigators, along with Dick Condon and Charlie Pannam, in the invention of the stab kick. He played the rest of the 1902 Premiership season and was a star again in the back-to-back 1903 campaign.

But then he stunned the football world by heading back to the Goldfields. His move came like a bolt from the blue for his Magpie teammates, and they missed him badly. Not just his football, either, for Rowell had become very popular with his colleagues, especially Jock McHale, and he was an important part of the social fabric of the club (he would often perform songs at club functions).

Rowell spent just a year in the west before once more returning to Victoria Park. Or at least trying to. The VFL repeatedly refused to grant him a playing permit, and eventually forced him to watch from the sidelines for the entire 1905 season. It was hugely frustrating both for the club and for Rowell, and almost certainly cost the Pies a Premiership.

By the time he finally returned to the playing field in 1906, Collingwood was in disarray under the coaching of Dick Condon. There was internal revolt that year: ‘Rosie’ Dummett quit as captain and Condon was suspended for causing internal dissension. But Rowell reigned supreme, playing like he’d never been away. The Herald voted him one of the top 10 players of the year, and many years later he would win his second club Best Player award for that comeback season.

Rowell’s journey took another turn in 1907 when he found himself called upon as the club’s playing coach. But he never really took to coaching, and asked to be relieved of the role midway through 1908. He was still a highly dangerous forward – he’d kicked 32 in 1906 and 25 in 1907 – but a youngster by the name of Dick Lee was now on the scene. Rowell himself turned 30 in his first year back, so the Collingwood selectors decided to try him at full-back.

That move proved to be a masterstroke. His clearing dashes from the last line of defence were a highlight, even as he lost a yard or two of pace. If the opposition scored a point, Rowell would be ready to use the resultant kick-in as the opportunity to launch one of these dashes, tapping the ball to himself then bolting out of the back half, frequently turning defence into attack with a long run and one of his trademark long kicks. Those kicks continued to be a major weapon, too, whether punts on the run or soaring place kicks from set plays. So good was his kicking that in 1906 he won a league footballers’ kicking contest.

Rowell held down the key defensive post with calmness, surety and not a little excitement for a further six years. He was massive in the 1910 Premiership season, winning a gold locket for “magnificent back play”. The next year, at the ripe old age of 35, he was there in defence for Victoria at the second ANFC Carnival.

His capacity for the extraordinary had showed itself again earlier that year when, at half-time in a game against Fitzroy, Rowell changed out of his footy gear into his running spikes and ran a promotional race against the world 100 yards champion, Jack Donaldson. It was a bit of PR for Donaldson’s title defence against the USA’s Charles Hollway the following week, and it worked a treat. Rowell was by now 35 and well past his best (he first ran at Stawell in 1902) but he pushed the world champ close. Most who saw it were convinced the result would have been different had the race been run 10 years earlier.

Only Teddy Rowell could have pulled off a stunt like that – running a PR race at half-time of a serious football match. But that summed up Rowell’s sense of life as an adventure, and his willingness to explore every opportunity it threw up. He was certainly one of the most colourful characters ever to pull on a boot for Collingwood. But he was also one of the club’s finest players – an excitement machine who became a firm favourite of the Magpie fans, as this early 1900s ditty attests:

“When Condon kicks to Pannam
The crowd begin to howl.
But they really pull the fence down
When it goes to Teddy Rowell.”