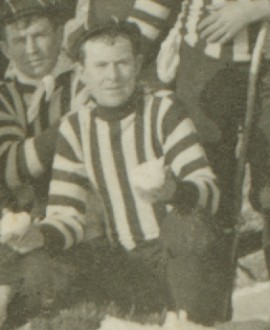 It’s almost certain that no three-game player in Collingwood’s history has had a bigger impact on the club than Tommy Nelson.

It’s not that there was anything special about his play in those three games, or the results they yielded: his on-field contributions passed largely without notice. But off the field it was another matter. For it was Nelson who, in his brief stint at Victoria Park, provided the words to the club theme song, Good Old Collingwood Forever.

Tommy Nelson had been a good, solid key defender with junior club Yarraville for the best part of two seasons before the Magpies started to pay serious attention. His marking was a highlight of his game (one local newspaper said he made a habit of taking “astounding marks”), and he was also an excellent kick who had managed to win a goalkicking competition at Yarraville’s annual picnic early in 1906. He was also a fine athlete who regularly turned out with the Yarraville Athletic Club, and worked locally at the Yarraville Rope Works.

Yarraville was a decent team in 1906 and would go on to win the Premiership, but they were rocked in August when Collingwood signed Nelson up for a few late-season games in the VFL. There were suggestions that the Pies had used the lure of the club’s forthcoming tour of Tasmania as an added inducement (such trips were seen as a real perk of being a VFL footballer in those days), and officials from the junior club were seething.

Their president, Mr J Murray, bemoaned that it was becoming increasingly difficult to keep good junior players in the district “on account of the constant inducements held out to promising juniors by senior teams.” These inducements, he said, included “trips to other States, theatre parties and picnics.” “Very few young men would refuse the opportunity of apleasant trip to Tasmania or New South Wales,” he said. He then pointedly added his belief that the actions of one senior team were “practically robbing” Yarraville of the chance for a flag by taking one of their key players. It didn’t take a master sleuth to work out which club he had in his sights.

In the midst of all the furore, Tommy Nelson quietly made his way into Victoria Park – just in time for the touring squad’s departure for Tasmania. The Pies thought they’d acquired a promising young defender. But they ended up getting a handy musical talent too.

Tommy was a talented singer and musician who regularly performed at annual meetings, parties, other social functions and in musical theatre in and around Yarraville (early in 1906 he’d performed the song ‘Old Kentucky’ to rapturous applause at Yarraville’s AGM). Singing was a major part of life around footy clubs in those days, especially when clubs travelled anywhere, and Nelson soon found his musical talents put to good use. Indeed, even though he was new to the group, Nelson was one of those named as being among those leading the group in song on the Loongana on the way across Bass Strait.

The Magpies arrived in Launceston on 7 August 1906 for an 11-day sojourn that included four games. The first of those, against a combined Northern Launceston team, was played the day after arrival and Nelson slotted in nicely at half-back, being named among the best players. Later that night he was again named among the best, this time for his moves on the dance floor at the Albert Hall in Launceston.

Clearly, Tommy Nelson had settled in well to life as a VFL footballer – even before he’d played an official game. But his truly big moment was at hand.

After travelling to Hobart by train, the team were taken on the Saturday (August 11) to a ground outside of Hobart for a game against a Southern Tasmanian combined side. Nelson was again named on a half-back flank, and on the way to the game he entertained his new teammates with a song he’d written the day before. He’d taken a song from the Spanish American war that had become increasingly popular during the Boer War, called Goodbye Dolly Gray, and added some words more relevant to his new employers.

Someone (either a reporter or tour party member) later revealed to the Collingwood Observer what happened next:

“Singing had by this time become a settled part of our trip,” he wrote, “and Tom Nelson led Collingwood by introducing one good chorus, and in this respect he emulated the deeds of his worthy namesake of old. His chorus was to the air of ‘Dolly Gray’ and ran as follows:

“Good old Collingwood for ever, they know how to play the game,

Side by side they stick together, to uphold the Magpies’ name.

Oh, the premiership’s a cakewalk, for good old Collingwood.”

The insider then chimed in with his own review of the new song. “The sentiments are very pretty and the Tasmanians were delighted with them,” he wrote, “but the ideas are too confident for the writer’s liking.”

And with that, Good Old Collingwood Forever was born.

The Magpies left Tasmania the following Friday, arriving in Melbourne on Saturday morning and heading straight to Victoria Park for a game against Melbourne. Nelson was rewarded for his good form in the Apple Isle with senior selection, but his debut performance attracted little attention. He played two more games before being dropped for the team’s one and only final.

In April of 1907 he was cleared back to his home club of Yarraville, where he enjoyed a fine career. He was among the best players in their 1908 flag, was appointed captain in 1909 and led them to another flag. He also captained a combined juniors team against Carlton. One local newspaper described him as “the hero of the side.”

But in terms of lasting legacy, nothing Tommy Nelson did at Yarraville matches the impact of the little ditty he put together while travelling with his new Collingwood teammates in Tasmania in August of 1906. He was a Magpie for less than two months, but for as long as there’s a Collingwood Football Club we’ll surely still be singing the words he wrote all those years ago.