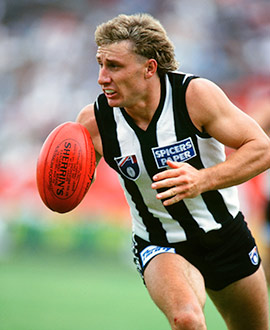 A cheeky rover with great acceleration, Francis enshrined himself in Collingwood history when he tied with Scott Russell for the club’s Best First Year Player Award in the premiership year of 1990.

Francis crossed to Collingwood after two years with the Norwood seniors in the SANFL, and it proved a fairytale end to a season that began disastrously when he copped a six week suspension for kicking West Coast’s Murray Rance in his first game.

He gave Collingwood much needed bite around the packs and his great breakaway pace made him a menace to the opposition.

In 1991 he was Collingwood’s best and fairest and was chosen in the All-Australian team.

A classy footballer and a regular selection in the SA State of Origin side, Achilles problems affected him in 1992, but his willingness to tear into packs meant he was always dangerous.

His fearless style of boring in for the ball led to injuries in later years and his pace was dulled. Thigh and knee injuries restricted him in 1995 then he regained some of his old form in 1996 when he ran third in the club’s best and fairest.

But a pre-season groin injury destroyed his 1997 campaign and after a similarly limited campaign in 1998 he was released by Collingwood.

He had a solid season under Tim Watson at St Kilda in 1999, kicking the winning goal against the Western Bulldogs at Waverley Park in round four, but then retired and returned to South Australia.