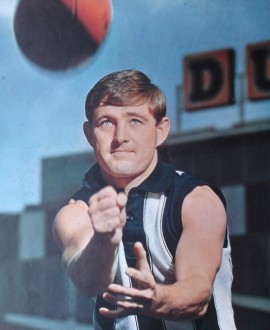 One of the problems with making a sensational debut is that you’re forever going to be measured against that first performance. And for some players, that first game is as good as it gets.

But not for Wayne Richardson. The football world was in awe after his debut against Richmond in Round 4 of 1966. The WA-born rover amassed more than 30 touches in that first game, and also kicked three goals. By season’s end he had kicked 37 goals, including one haul of six and another of five, finished fourth in the Copeland Trophy and been named not just the club’s best first-year player but, in the eyes of most critics, the best rookie in the whole competition.

And that was just the start. He would go on to become one of football’s great accumulators, regularly getting 25-30 or more possessions in games – and almost always using them well. The goalkicking prowess he showed on debut would remain a staple of his game too: in the end he would finish his career with 323 goals, alongside two Copeland trophies, three other second place finishes, a swag of other awards and honours and a games total that was at the time the second highest in Magpie history.

Not bad for a guy who came to Collingwood from a small wheat and sheep town about 250km east of Perth called Trayning. Wayne was at that stage just 17, and had been transferred to Trayning with the Bank of New South Wales. The Richardson family was well known in West Australian football circles, especially around Fremantle. Wayne’s father Arnold was a top player with South Fremantle in the 1930s, and his mother was on the social committee at the same club.

An odd trail of connections led Magpie recruiters (most notably Harry Collier) to make the trek to Trayning. They liked what they saw. Richardson was happy to move east. But a messy and lengthy impasse developed between East Fremantle (to whom Wayne was zoned), South Fremantle (who Wayne would rather have played with), the WAFL and Collingwood. The West Australians blocked Wayne’s clearance.

Richardson was already in Melbourne and played in the Magpies’ 1965 practice matches, but his many pleas for a clearance fell on deaf ears in the west. In the end he had to sit out the entire season, training all the while but only once playing — in a mid-year practice game in Bendigo.

Late in 1965 Wayne successfully appealed to the Australian National Football Council and became free to start preparing for his 1966 debut. And when it finally, finally, came, he was the talk of the VFL.

Over the next 13 years Richardson reigned as one of the premier rovers in the competition. He was a sure ball-handler, had superb skills on both sides of his body and used the football perfectly – a brilliant passer, a long punt kick when needed and uncanny around goals. He was not particularly fast but read the game beautifully and also developed an uncanny understanding with his number one ruckman Len Thompson. They became one of the most feared and most consistent ruck-and-rover duos in the League (and often for Victoria too).

Richardson was a phenomenal possession-gatherer — and consistently so. Week-in, week-out he would win more kicks and handpasses than anyone else on the ground, all in his own, unobtrusive way. Ironically, that was part of his problem. He was almost too consistent for his own good. It was all done so regularly, and with such little fuss, that some Collingwood people took him for granted. Some of his former teammates certainly thought so.

“I have never believed that Wayne got the credit he deserved,” said Peter McKenna. “He was just so consistent. Everyone took it for granted that he was always there, but they probably forgot or didn’t notice what an amazing job he was doing.” Barry Price shared the same view. “I believe a lot of people took him for granted, because every week he would get his 30-plus possessions no matter what the opposition,” he said. “And he always used the ball so well.”

Richardson’s consistency extended not just to the quality of his performances but also the frequency of them. He hated missing games through injury or illness, and at one stage played more than 140 in succession. To miss so few games is not just a matter of luck; it also requires the courage and mental toughness to play with, or quickly overcome, injuries. Richardson had both qualities in abundance.

With his courage, skill and consistency — and a lively, outgoing personality that made him one of the most popular players at the Club — it was no surprise when he was appointed captain late in 1971 to replace the beleaguered Terry Waters. He held the position until the end of 1975, when the pressures of the business he had started the previous year began to impact on the time he could devote to football.

The 1976 season was a disaster. After just two games of the season both Wayne and his brother Max were dropped to the reserves — largely at the instigation of the committee rather than the coach and selectors. Wayne had heard about his demotion just hours after the previous Saturday’s game, from a source in the boardroom. When the press contacted him for a reaction to his dumping he claimed some committeemen had it in for him. He also criticised the team’s training methods and accused the president, Ern Clarke, of selecting the side. The comments, he says, were made in passing. But when they were splashed all over the back pages of Melbourne’s newspapers they looked bad — and he was made to pay the price. At a special meeting on the following Saturday morning he was suspended for four weeks and, in a peculiar move, not even allowed within the confines of Victoria Park. Just as oddly, he did not even serve his full suspension. Several weeks later he was back in the seniors — despite not having trained in more than a fortnight.

He stayed until 1978, when his frequent appearances on the bench showed him that the end of the road was near. But he was talked into staying with the reserves in 1979, acting as a player and specialist coach, to help with the development of a crop of young players including Tony Shaw, Denis Banks and Peter Daicos. With less pressure he enjoyed the year immensely. He returned again in 1986, joining as a board member after the New Magpies years and serving until 1994. His son Mark also forged a decent career of his own.

Trayning is a long, long way from Victoria Park and the MCG. But Magpie fans will always be grateful that club officials of the day took the punt and made the trek to check out the promising kid they’d been told about. In Wayne Richardson, they came back with one of this club’s truly great players, and greatest contributors.